Are you looking to evaluate enterprise technologies faster? Sign up to watch GigaOm's 4-part on-demand research video series that breakdowns our research methodology and what differentiates us as a leader in emerging technology research. 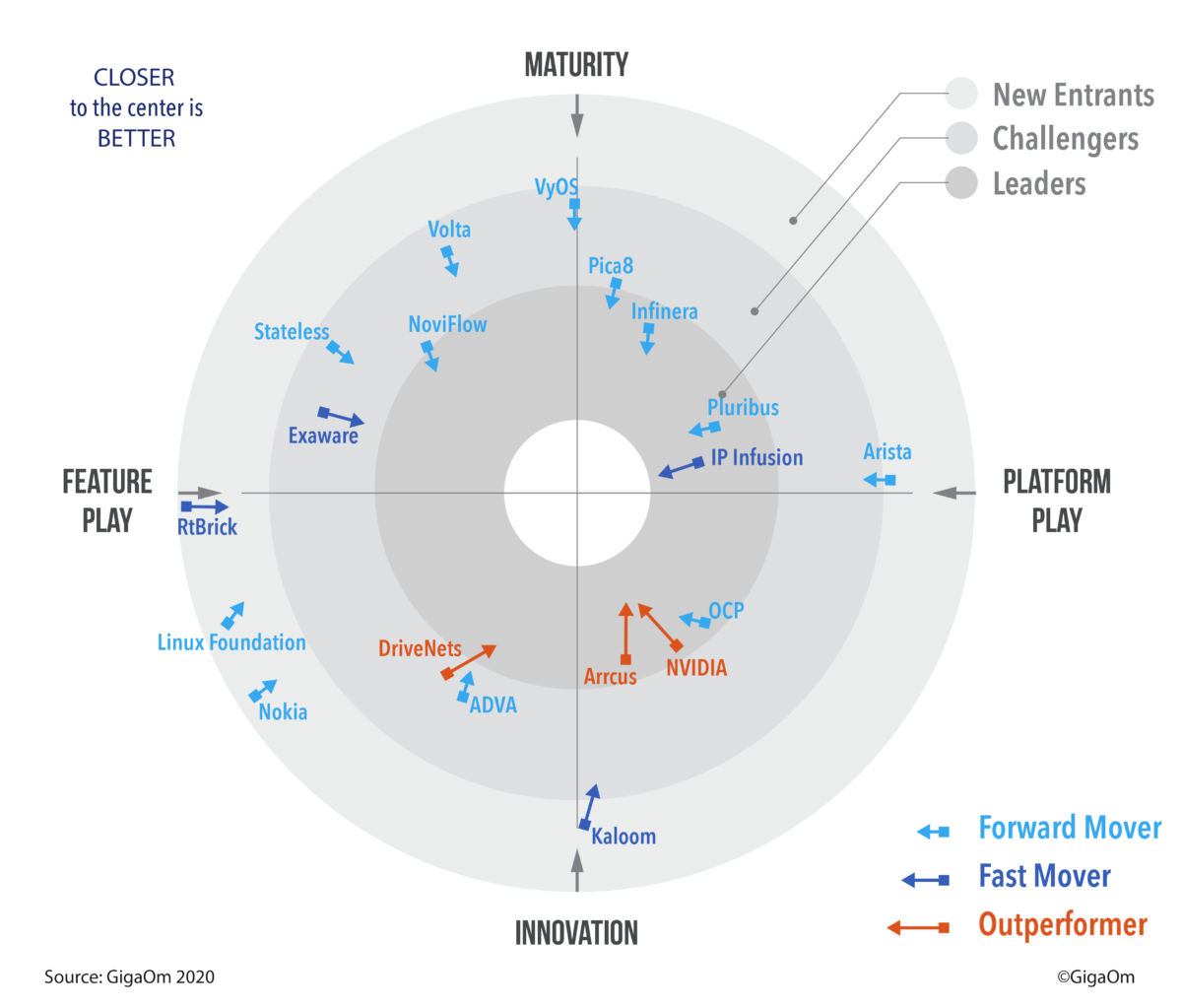 With the primary focus on routing—instead of data center switching—the NOS landscape is rapidly evolving. The traditional incumbent vendors are reinventing themselves through acquisitions, alliances, and moves to “open” architectures. Open-source initiatives are leveraging contributed code and the collective power of communities to drive innovation. Last but not least, new players are emerging with disruptive, cloud-native approaches, significant financial backing, and high-profile early adopters.

This report provides an overview of the vendor landscape based on the following table stakes, which are mature, stable solution features that are common across all vendors:

Based on these table stakes, NOSs such as Cisco’s Internetwork Operating System (IOS), Juniper’s JunOS, and NVIDIA’s ONYX are not included because they—despite being disaggregated—are sold and supported only on the associated vendor’s equipment. Vendors like Dell EMC have also been excluded because they either own a proprietary NOS or support an open-source solution like SONiC (which is hosted by the Open Compute Project and described in that section). While open and disaggregated, the Open Networking Foundation’s (ONF) two NOS offerings, ONOS and Stratum, are not standalone and, therefore, are not covered.

Note: If you are aware of any NOS that meets the table stakes but is not included in this report, please email GigaOm and let us know.

Lastly, it’s important to note that, in addition to significant projects hosted by the Open Compute Project (OCP), the Open Networking Foundation, and The Linux Foundation, several other organizations are shaping the direction and evolution of disaggregated networking.

Foremost among these is the Telecom Infra Project (TIP). Formed by Facebook in 2016, TIP is a global community of companies and organizations collaborating to accelerate the development of open, disaggregated, standards-based networking solutions spanning three strategic areas: access, core services, and transport. Many of the world’s largest NSPs, together with most of the ODMs, merchant silicon, and NOS vendors mentioned in this report, are members of TIP.

As you read this report, please do so with an open mind. Driven by the demand for flexibility, performance, and scalability—combined with cost efficiency—the vendor landscape and NOS offerings are rapidly evolving. We recommend you use this report to create a shortlist of vendors that support your target market, deployment model, and use case. Then contact the relevant vendors for additional information on features and cost.

How to Read this Report

This GigaOm report is one of a series of documents that helps IT organizations assess competing solutions in the context of well-defined features and criteria. For a fuller understanding consider reviewing the following reports:

GigaOm Radar report: A forward-looking analysis that plots the relative value and progression of vendor solutions along multiple axes based on strategy and execution. The Radar report includes a breakdown of each vendor’s offering in the sector.

Vendor Profile: An in-depth vendor analysis that builds on the framework developed in the Key Criteria and Radar reports to assess a company’s engagement within a technology sector. This analysis includes forward-looking guidance around both strategy and product.