Lights Out: Why Your Next Data Center May Be Hands-Free

Could we be entering an era of hands-free data centers, where remote software and robotics handle tasks that until now have fallen to human technicians? That prospect may not be as far off as you think, according to a recent InformationWeek article by John Edwards that explores the push to make data centers autonomous. As Edwards reports, the COVID-19 pandemic has helped force the issue, with data centers worldwide operating at sharply reduced headcount.

GigaOm Analyst Ned Bellavance was cited in the article. He urged IT managers to establish the proper foundation for an automation effort, cautioning that existing data center deployments may be difficult to transition to full hands-free operation. He stressed that a homogeneous and standardized environment is important to achieving success.

As a case in point, Bellavance singles out Microsoft’s Project Natick, an effort to develop enclosed data centers that can be deployed in coastal waters on the seafloor. Microsoft in 2018 deployed a 240kW data center with 12 racks and 864 servers off the coast of Scotland as part of its Phase 2 testing. As Bellavance quips:

“If you want to know what [a] true lights-out [data center] looks like, check out Project Natick from Microsoft. It’s pretty hard to send a tech undersea.” 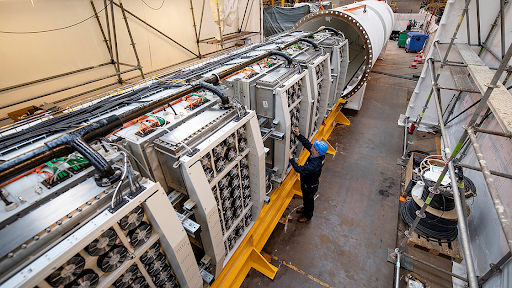 Figure 1: Microsoft techs slide a rack of data center servers and infrastructure into an undersea container for deployment to the seafloor off the coast of Scotland. (Photo by Frank Betermin)

Ambitious projects aside, Bellavance cautioned that achieving a hands-free, lights-out data center is no small task.

“The fact is, it is incredibly hard to put all the necessary pieces together for a truly lights-out data center. You are looking at a lot of disparate systems that may have their own proprietary format and protocol,” he says.

The good news? Bellavance says progress is being made to establish helpful standards, such as Redfish for out-of-band management of servers, networking, and power management. These efforts are especially important, he explains, because a single tool is unlikely to manage every aspect of the data center.

“For that reason, I would look for management software that does a great job in a specific area and has API hooks for an orchestration layer to grab onto,” Bellavance says.

So how can IT organizations prepare themselves for a bold future full of flying cars and self-driving data centers? Bellavance, who has authored recent GigaOm reports about edge infrastructure and edge colocation, offers a few words of advice: