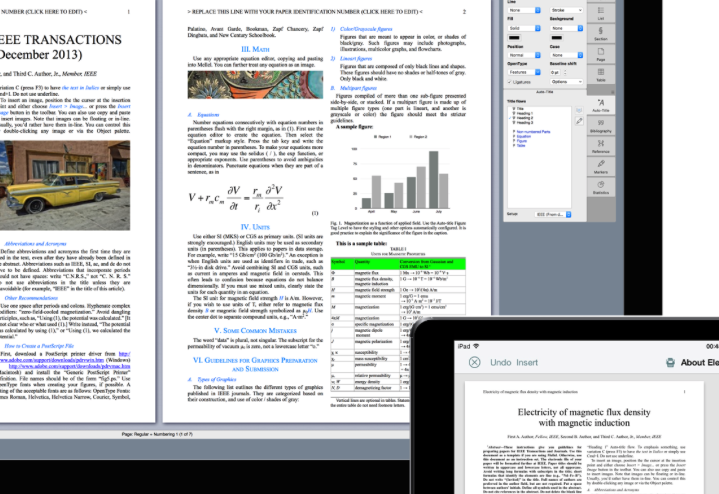 OK, who remembers the word processor wars? Back in the day, the world had a choice of four or more desktop document editing packages, but unless you are a diehard fan of WordStar (these exist, ask George R. R. Martin), chances are you are using Microsoft Word or Open Office on the desktop, despite their respective foibles. Online tools such as Google Docs also exist, but all seem to be built around the needs of office workers rather than writers.

So, is there a place for alternatives, not in terms of “alternative to Microsoft” but “alternative to the default set of office features”? I hadn’t heard of Mellel Word Processor for Mac, which is aimed at authors and academics, so I thought I would catch up with the company and find out what makes them tick. Answers below!

1. Where did Mellel come from, i.e. why was it founded?

Mellel for Mac is the brainchild of 2 brothers: Ori and Eyal Redler. Ori, an editor-in-chief, was fed up with the limited and quirky-behaving word processors developed for Mac. Eyal, a software developer, was tired of hearing his brother’s complaints. So, they developed Mellel together. That was back in 2002. Since then, the academics, writers, and editors who use Mellel have also contributed their wish list to the software’s development.

Mellel for Mac is developed by long-form writers for long-form writers. Sure, you can pen a letter to Grandma on it, but it’s specifically designed to help academics and professionals create and manage complex written works without losing their minds in the process.

3. How does it fit next to ‘traditional’ word processing?

Mellel for Mac is to MS Word as Adobe Photoshop is to MS Photo Editor. Mellel isn’t really designed for light writing or making labels; it has an advanced suite of features and palettes to help serious writers complete their journey to 1000 pages. That’s not to say that MS word isn’t a great product – but Mellel serves a fundamentally different purpose. We’re not into software suite integration to boost business productivity. We’re for helping writers maximize their CONTENT productivity.

Mellel for Mac is advanced in the most simple way: we help content creators maintain control of their document’s complexity and focus on their work – without any advanced knowledge of markup/markdown code to do it. This is important. Many writers migrate to markup/markdown text editors in search of greater control and reliability. But they have to learn an entire code language to do it, while foregoing their ability to edit and see their document as they write. Why learn code to manage your long documents when you can just work with Mellel?

4. Where are you seeing the most success?

Academics love us! The way Mellel updates in real-time any amount of references, cross-references, indexes, bibliographies, and TOCs – displaying the final format at all times. This also lets them see and control style to meet any journal’s standards. Editors are impressed with the advanced find and replace feature that lets them transform their document in seconds.

In addition, writers can save all style standards and searches directly into the application so the can load them again and again with a click. Everyone appreciates Mellel’s power and speed. It never becomes sluggish, as is common with most other word processors once you get past 50 pages.

We are very focused on spreading the word about Mellel right now. We have a core following of over 100,000 users that is quite supportive of our work and encourages others to try Mellel out. Really, the sky is the limit. We’re constantly making Mellel a better tool for writers, whether from suggestions from our staff or from users. As long as it makes Mellel for Mac a better tool for professional wordsmiths out there.

My take — a sigh of relief

Microsoft itself got into a great deal of trouble a few years ago in terms of its proprietary file formats, which happened to make it easier to stay working with its Office products than with any other: when governments realised that Microsoft had become more of an obligation than a choice, they pushed back and dictated the need to support ‘open’ document formats (a move that coincided with an industry drive towards open source, capitalised upon by Microsoft’s competitors).

But even without this conflict, people have stuck with tools from ‘the man’ because, well, that’s what everyone else uses. It takes a certain leap of faith to work with another tool than the de facto: the downside is that one is therefore stuck with whatever limitations the de facto brings. Word does not make it easy to work with large documents, nor Open/Libre Office (which feels like an old version of Word), and particularly not Google Docs and other online editors.

Some writing projects are lengthy by nature, however. The need to manage complex outlines in parallel with the main text, to handle revisions and notes, to deal with supporting materials in a structured manner, are part of the job for authors, academics, script writers and many others. Ultimately the challenge is about dealing with complexity: for people who find Microsoft Word getting in the way of, rather then helping the writing process, tools like Mellel are a blessing.