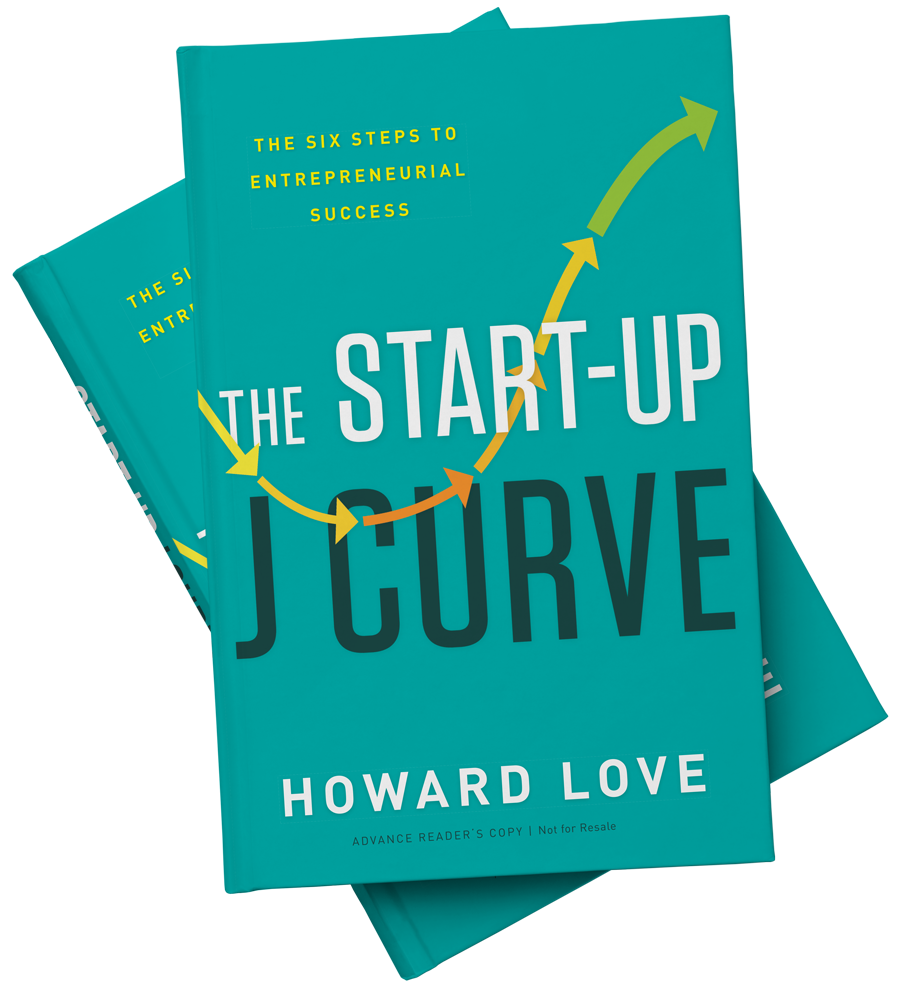 There are all kinds of books about startups. How to come up with an idea, how to structure a company, how to attract investors, and how to know whom to hire. There are books about rapid development, offshoring, pricing strategy, how to get good press, how to create a roll-out plans, how to manage social media, how to build a board… and on and on and on.

The Start-up J Curve, by Howard Love, doesn’t cover any of that ground. Rather Love has taken on an entirely different mission. But before I get into that, a little background will go a long way to understanding what he is doing with this book.

Love is a prolific angel investor in Silicon Valley. Over the course of three decades, he has heard thousands of pitches, invested in nearly sixty companies, and has had a couple of dozen good exits. Additionally, he has been through the wringer himself a few times with his own startups. Again, with success.

And a few years back he was talking with his business partner David Hehman about how virtually all startups go through the same basic steps in their lifecycles. Over and over again, throughout the many years he has been doing what he does, Love saw history repeated again and again in almost every one.

And the interesting thing to Love was that how startups actually unfolded and grew was nothing like how people expected them to do so.

So Love has spent the better part of the last year documenting what he calls the J Curve. The curve has that name because of its general shape. The J Curve is comprised of the six distinct stages that, Love maintains, virtually all startups go through. The ones that are able to make it to the end of the J Curve, well, those are the ones that have succeeded. It is like that kids’ game Candyland, only if you make it all the way through, you don’t get just get bragging rights, you get a nine-figure check.

The book is a roadmap designed to, I suspect, help the entrepreneur get through each of the steps and to reassure him or her that the craziness happening around them is all perfectly normal.

Startups are hard. I can personally attest to that. There is a part of the J Curve Love calls the “Long dark winter” where nothing really went as you planned, demand for your product didn’t crash the servers, and you feel like all may well be lost. You start rehearsing that phone call with your aunt explaining how you managed to lose the $10,000 she carefully but confidently entrusted in you. I have spent many such winters, and had I had Love’s guidance, I would not have been able to avoid the winters, but I would have taken some reassurance that there was a path out of them.

What the book purports to offer, it does so masterfully. Love’s knowledge of the lifecycle of startups is encyclopedic and he seems to be able to effortlessly recall example after example to show the various steps along the curve. He writes breezily in an easy-to-read fashion. Although the book clocks in at 260 pages, it is fast read the first time through, but my copy already has a dozen Post-its sticking out of it to mark places I need to return to and contemplate.

In summary, this is not a book for everyone. It is certainly not the kind of book you would ever read for fun. It is a very specific guide to doing a very specific thing: Launching a startup and seeing it though to success. If that is not a journey you are contemplating in life, look elsewhere for reading material, as this would probably be far too dry for you. But if that start-up spark stirs somewhere in your soul, then Love’s book should be on your must-read list.

The Start-up J Curve is available at howardlove.com.

(Full disclosure: Howard Love is an investor in fifty or so technology companies, including Gigaom. This review, however, was prepared with no input from him.)

Howard Love is a life-long entrepreneur who has founded, co-founded, funded and managed startups for over 30 years. He has founded or co-founded over 15 businesses and invested in over 50 startups. including:

Love was born in Detroit in 1960, and attended Phillips Exeter Academy (1974-1978) and Colgate University (1978-1983). He completed his first Ironman competition at the age of 51 in Lake Placid, NY. His first book The Start-Up J Curve is published by Greenleaf Book Group. Love resides in Silicon Valley, CA.