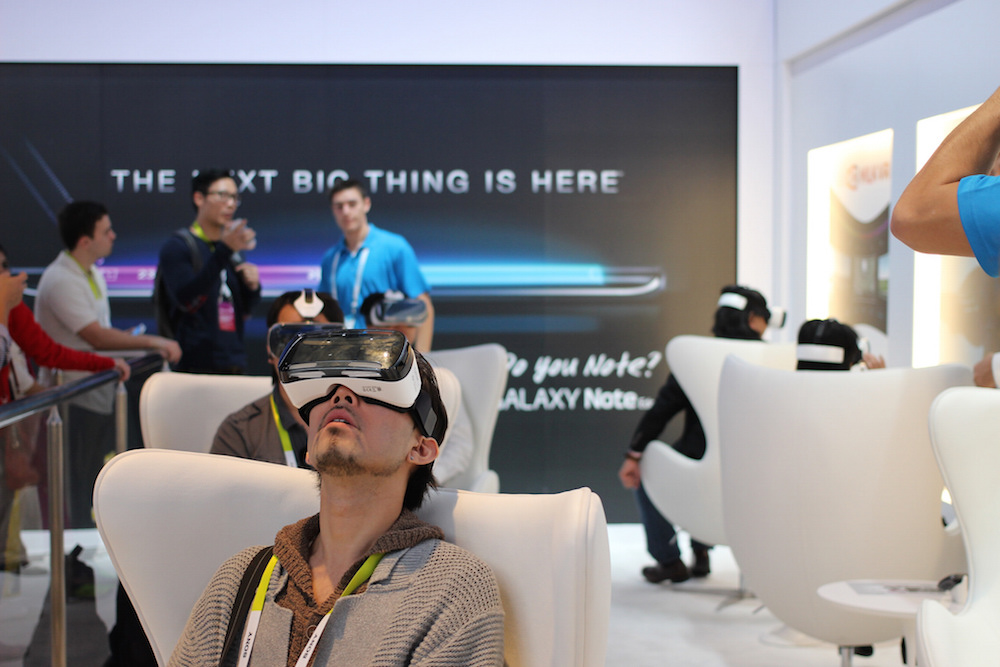 When we talk about VR, we tend to talk in broad strokes. “Experiences,” we call them, as if that term is somehow covers and conveys the depth and disparity that exists between gaming, watching, and interacting with VR content. The reality of virtual reality, however, is not so easily categorized or described.

VR content is the big blanket term that clumsily and imprecisely covers large and vastly divergent portions of the content market as it stands. VR games, immersive video, and virtual cinema all fall under “VR content”, but they’re fundamentally different experiences, possibly appealing to very different portions of a potential mainstream VR market.

Let me get this out of the way: the Samsung Gear VR, Oculus Rift, HTC Vive and Sony Playstation VR systems that are coming en masse in Q1 2016 are wildly dissimilar creatures. From hardware to headware, these headsets have commonalities (gyroscopes, accelerometers, lenses) but result in very different experiences, namely with respect to resolution, frame rate, quality of the image, type of content supported by each headset. But alas, that’s another story, which we’ll save for another time.

We’re here to talk about VR content and what there is to do in a headset. Who is VR for and why does it exist? What does VR content look like, where does it come from and end up, and why should anyone want to strap something the size of small(ish) camcorder on her face?

It’s no secret that a large portion of the early adopter market for VR headsets will be made up of gamers, but gaming is really only part of the story. We’ll get to it, but first let’s take a look at the sleeping giant of VR content: video.

For the time being, video in VR also pretty much falls into two categories: immersive video and virtual cinema. Video, for the purposes of this discussion, is any bit of content that you experience in a VR headset during which your degree of agency is limited to where you’re looking.

In other words, whether it’s immersive or passive, in video content, you can’t control your or interact with your environment directly or physically. In some cases, you may be able to explore it by looking around, but your impact on the world is limited to changing your own perspective. Gaming and interactive content, by way of contrast, is content that allows you to affect and interact with the environment around you, whether its via gaze-based mechanics or controllers of any kind.

I’ll admit that the first time I saw Paul McCartney in concert, I cried. Paul’s my favorite Beatle, the mastermind behind most of my favorite Beatles songs (including and especially Fool on the Hill), and seeing him live, right in front of me was, to put it simply, breathtaking.

Of course, I wasn’t actually there. I was watching it in a VR headset, from a much better vantage point than any seat could hope to provide. I was right next the piano. If I’d been any closer, I’d have been sitting on the grand piano right in front of him. He was playing Live or Let Die which, while not one of my favorites, was incredible. There was no moment at which I felt just exactly like I was right there in the stadium, surrounded by thousands of people and whisper-distance from Paul McCartney. But then, I also forgot that I wasn’t right there. And that’s what VR is all about.

Immersive video content comes in a number of different forms, though it all stems from the same general principle: putting you into the story or the action.

Companies like Jaunt, Vrse, WEVR, Discovery, and even Jeep and Volvo are creating immersive video content. Right now, for both Cardboard and Samsung Gear VR, there are a number of apps and short video experiences that put you anywhere from in the audience at SNL to in a wetsuit, diving into and exploring a shark-riddled shipwreck. There are VR tours of museums and stunning locations, heart-pounding skydiving, flying and racing experiences, and human-centric stories and short films.

On the other end of the immersive video content spectrum is WEVR, the VR software company recently on the receiving end of a big ($10M big) investment from HTC (makers of the Vive headset). WEVR is an open platform VR ecosystem with agnostic software solutions, and it’s looking “enable a content explosion,” in the words of co-found and CEO Neville Spiteri.

Conal Byrne, Discovery’s SVP of Digital Media and one of the leads for Discovery’s VR project calls virtual reality, “the first medium where you can turn a fan or a viewer into a character by just placing them smack-dab in the middle of the story.”

And really, that’s what lies at the core of immersive video: presence.

“You need to think about the audience as being in the experience,” says WEVR’s Spiteri. “You’re not just a viewer…we use the term ‘visitor’.”

Though the idea of creating video around a viewer instead of in front her may seem simple, the effect it has on the way we tell stories is nothing short of ground breaking. “With that simple change,” says Byrne, “to be in control of your POV as you watch video–it’s a seismic change.”

Beyond presence lies another, much more illusive component of immersive video: storytelling. Right now, VR is new and novel, but there will come a time when strapping on a headset and looking at a sunset may come to feel commonplace–something like looking at a beautiful photograph. Enjoyable, stunning even, but somehow stagnant. The compelling element of any video, any experience, is the story. Immersive video will eventually develop and evolve to stretch the boundaries of storytelling, and that presents some exciting opportunities tempered by some very real challenges.

“360-degree video or ‘capture-based VR’ where you’re starting with some aspects of the real world,” says Spiteri, “is proving to be very compelling and creating opportunities for ways of creating and telling video-based stories that have different degrees of interactivity.”

Requiring complex multi-camera/lens rigs, sophisticated editing software, and a team of people who understand the complexities of capturing all 360 degrees of a scene, creating immersive real-world video content is a difficult task. But of course, creating immersive video is much more complex than simply setting up a multi-camera rig that has the technical capabilities to capture 360-degree video.

“With traditional storytelling, the director has a pretty high degree of control over what you’re looking at,” says Spiteri. “The art of drawing the user’s attention and directing gaze becomes pretty fundamental to the story and the storytelling process.”

While much attention is given to capture and edit systems, fancy and rugged rigs, and perhaps one of the most crucial factors of storytelling in VR has nothing to do with technology at all. Instead, it’s entirely human.

“We want to make sure that humans don’t get lost in the mix,” says Byrne, “that storytellers, journeymen, pioneers, the people that bring stories to life…don’t get lost.”

In discussing the lush forest-based Survivorman experience on Discovery VR, Byrne says, “It’s one thing to shoot a 360 shot of that forest off the grid in Canada, but when [Survivorman’s] Les Stroud steps out of that forest and starts talking about what he loves about being off the grid and why he does what he does, teaching survival to the viewer, it takes on a whole other meaning and comes alive.”

Like my experience with Paul McCartney, the human element is essential. Who you find in the scene and what they have to share is every bit as important as where you are when you put on the headset.

One of this year’s most stunning examples of immersive video, however, comes from Oculus Story Studio, and features not a human, but a hedgehog. Henry is a short film that follows Henry the hedgehog as he embarks on a journey to find friends.

Unlike much of the immersive video content that exists and is available right now, Henry is an animated VR short and puts the audience inside of Henry’s animated world. The visuals are crisp and stunning, but perhaps one of the most stunning elements of the film is the way that Henry behaves within it.

Henry can look at you. Like, right at you. And while it sounds simple, that is a fundamental paradigm shift. This isn’t just breaking the forth wall, it’s pulling you inside so that the fourth wall is firmly behind you. Henry’s world was designed around the you, the viewer, and you’re a part of it.