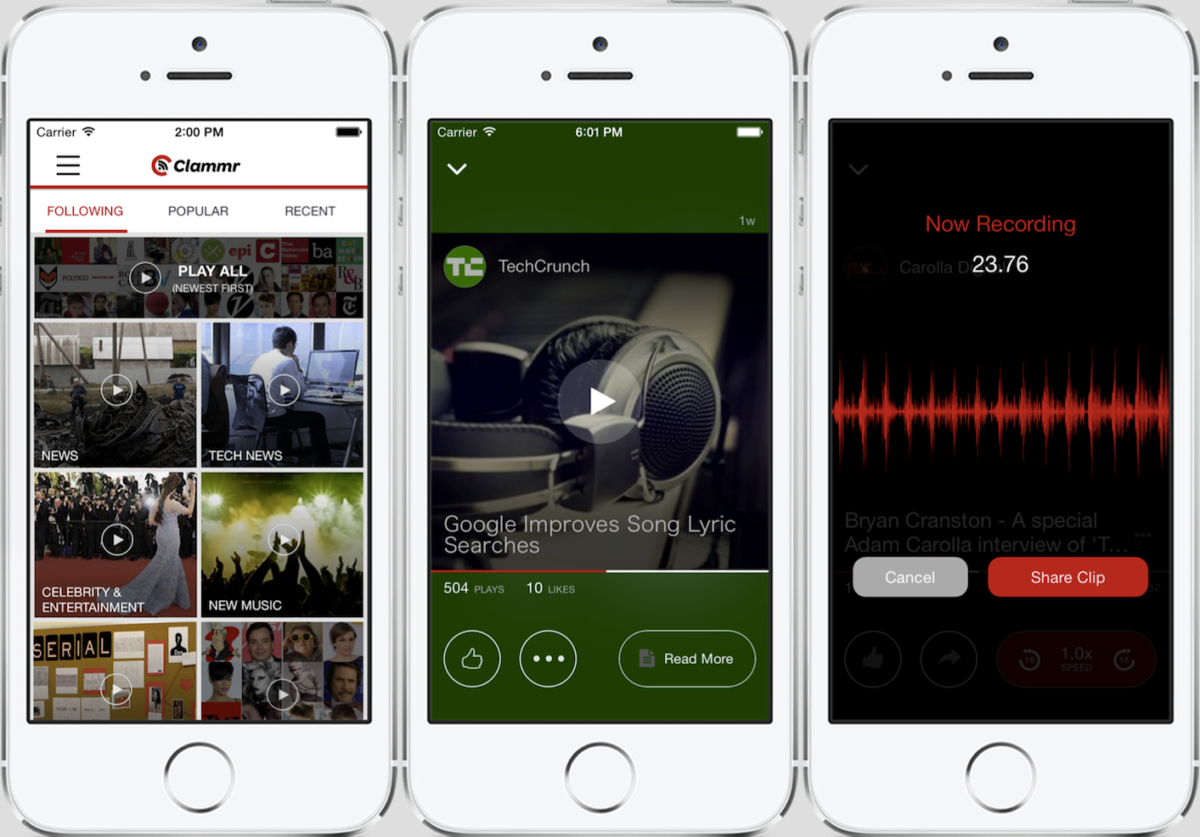 While the medium of podcasting is currently experiencing renewed interests — both business and from listeners, there are still some key issues that prevent a podcast from achieving the same level of mass distribution as written or video media.

In other words, sharing the best parts of a podcast isn’t as easy as it probably should be. A 40-minute-long podcast episode might have plenty of quotable, sharable moments, but doing so is kind of a pain. You can transcribe the entire quote and then share to Facebook/Twitter. Or, you could make a general comment and link to where that particular episode is hosted online, and allow those interested to figure out what you were talking about (even though they probably won’t). New startup Clammr has a solution that might be a game changer for podcasts, and interesting audio of all sorts.

The service, launching today, allows you to click a “Clammr” button whenever you come across a particularly interesting or sharable moment while listening to streaming audio. It then grabs a 24-second clip (starting a few seconds before you press the button to ensure you get the good parts) that can then be easily shared on Facebook, Twitter, etc. For Twitter, Clammr is actually only the second service to be granted access to a special embedded audio Twitter card (with SoundCloud being the other).

“We decided on 24 seconds because that’s roughly enough time to capture a good [clip] of a podcast or audio program, but not enough that it wastes your time,” Clammr cofounder Parviz Parvizi told Gigaom, adding that the length also lends itself very well to sharing.

With today’s launch, Clammr is also announcing partnerships with on-demand audio networks PodcastOne and Midroll, as well as integration with a slew of podcast hosting platforms such as Libsyn, Blubrry, Spreaker, Buzzsprout, Podbean, and others. The startup is also debuting an iOS app, which allows users to keep track of all the audio content they’ve Clammred and gain access to a playlist of all those audio clips. (I’m not entirely sure how useful that last feature might be right now.)

Parvizi said that Clammr isn’t just intended for listeners, and envisions podcast hosts using the short 24-second format to better promote their shows throughout the week. Beyond that, the service could also prove useful in getting more life out of video programming that typically never has the audio portion ripped. For instance, that last Superman v. Batman trailer? I’d have loved to use Clammr to rip only the super campy lines to share among friends.

As for a business model, Parvizi declined to elaborate but did say advertising and packaging Clammr into a premium product for media businesses were both possibilities.