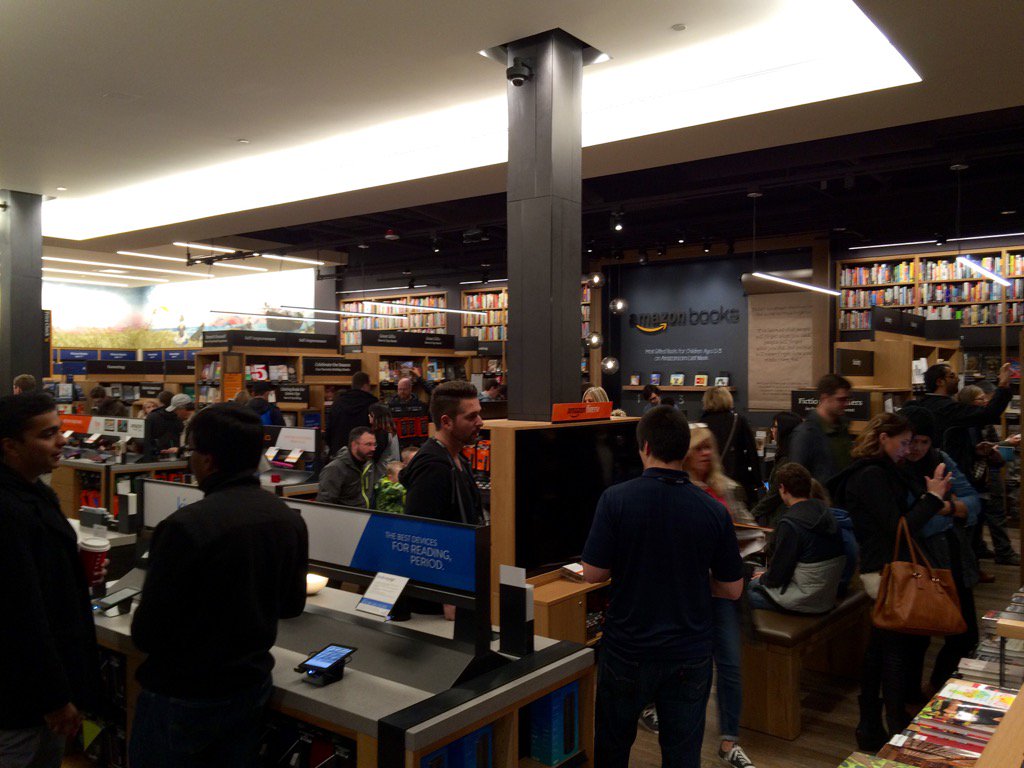 Earlier this month, Amazon opened a bookstore in a mall that used to house a Barnes & Noble. Much has been written about this foray into the physical realm: It’s been called a potential library of the future; Amazon itself has been called the Darth Vader of the books business; and some have wondered about the possibilities afforded by a location that bridges online and offline commerce.

Those are all interesting considerations, but as with Amazon’s other programs, the secretive company hasn’t said whether this is a small test or the beginning of a larger initiative that will lead to Amazon Books locations across the country. So I don’t want to consider the effect this physical store could have on Amazon — I’d rather question why other brick-and-mortar stores are resting on their laurels.

Seriously, why aren’t there more retails stores like Amazon’s book store experiment? A store with a variety of goods on physical shelves with prices that fluctuate to stay in sync with the online version of the store. Of course, there would need to be some changes to accommodate those who don’t like change, but there’s potential here to merge the online and offline shopping experience.

People use their smartphones while they shop. Often this is because they want to learn more about an item before purchasing it. One study from 2013 states that only six percent of people who use their smartphones in a physical store plan to purchase an item online. The rest were seeking more information about the item’s quality, the reputation of its manufacturer, and other data that might inform a purchase. (I’m sure that has changed significantly over the last two years, with Amazon’s image-based physical product search tool helping lead the charge.) Still, that could change as more people use their smartphones to find the best prices. Why buy something from a brick-and-mortar store when you can order it online for a lower price, even after figuring in the costs of having it shipped? Unless someone needs the item immediately — in which case someone probably isn’t comparison shopping — the lower price will win most of the time.

Retailers could change this by emulating Amazon Books’ model of automatically price-matching items sold in their stores to items sold on their websites. Right now there’s no guarantee that a Walmart store will match the price of an item sold on Walmart.com, for example, and other stores have similar policies. It’s almost like retailers actually want shoppers to treat their stores like showrooms.

The truth is that I don’t want to check the prices of items on my smartphone. I’m indecisive enough when it comes to shopping — I’ll often grab an item, think of buying it, then put it back right before I get to the checkout aisle. Multiple times. Having to worry about a price discrepancy between a retailer’s physical location and their online store just gives me even more reason to reconsider a purchase. Knowing that the price I see on a shelf is the price I’d have to pay online would make the whole process easier. (While I could still compare the price to Amazon and other sellers, it would be foolish to expect retailers to automatically match a competitor’s price instead of requiring shoppers to notice the discrepancy.) That offers all the benefits of shopping at a physical store with fewer of the drawbacks.

Of course, Amazon can get away with this because it’s running a test in one location and is comfortable with wafer-thin margins on the items it sells. Other retailers have their own challenges, like the sheer number of employees required to staff physical locations around the United States, that make it harder for them to pull an Amazon Books and bridge the gap between on-and offline shopping.

But that might be what it takes for these stores to thrive. What happens when Amazon slowly but surely competes more and more with physical locations? The company’s already expanding its grocery business, for instance, and is reducing the amount of time it takes to ship items to customers with multiple services. Amazon Books — if it’s successful — could easily become an Amazon Market. There are other advantages, too. If an item on the shelf is sold out, retail stores could provide incentives for people to pull out their phones and have the item shipped to their home later on. Surely that’s better than just losing the customer.

Stores could also apply dynamic pricing to certain goods. I’m not saying they should be dicks and implement “surge pricing” the same way Uber has — that wouldn’t sit well with shoppers, managers, or regulators — but it would give the stores more control over the price of items that sit on or fly off the shelves. Why have near-static prices that only change once a week, or when a sale goes on, when you could experiment with different prices to see what works the best?

Perhaps we’ll see more online sellers follow Amazon’s lead here. It seems easier for online stores to introduce physical locations than for brick-and-mortar stores to get people to use their websites. The future is digital; better to build for that future and experiment with the past than the other way around. Still, it wouldn’t be surprising if traditional retailers like Walmart and Target attempt this fusion.

If that happens, it will be caused by Amazon’s willingness to make shopping easy. It doesn’t ask people to leave their homes to buy something; nor will it require them to buy something online if they prefer to handle the item in person. The company morphs to suit its customers instead of requiring its customers to change their lives (even if it’s just by asking them to drive somewhere) to shop.

Doesn’t that sound better than driving to a brick-and-mortar store and having to check prices on your smartphone to get the best deal? Who wants to waste that trip? Hell, who wants to walk around stores filled with people struggling to push a cart and check prices on their phones at the same time? Grabbing an item, taking it to a register, and getting a fair price on it shouldn’t be so damn hard.