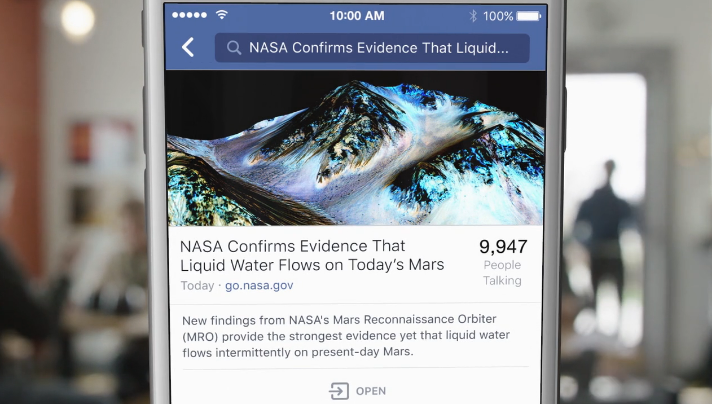 Facebook is updating its search tool to make it easier for users to find things that interest them among the 2 trillion items archived by the company’s index.

The update boasts personalized search suggestions, the ability to search through public posts in addition to those made by friends or family, and a new tool that allows people to view public conversations around news stories. That last item is by far the most interesting — and the one most likely to worry Twitter.

Twitter often bills itself as a forum for public conversations. Unless someone makes their entire account private, every 140-characters-or-fewer missive is indexed and can be found by anyone using the service’s search function. This makes it relatively easy to find and participate in active conversations — especially when used in conjunction with hashtags, Twitter’s defining mark. Facebook has basically just recreated one of the most useful parts of Twitter.

I doubt this will convince Twitter users to suddenly use Facebook as a home for their pithy, snarky-or-smarmy remarks about the day’s news. And that’s OK. Facebook has many times as many monthly active users as Twitter; and with more and more people using services like Instagram or Messenger, it’s already established itself as the social network of choice for more than a billion people. Now, it just has to make sure those people don’t have dalliances with other apps.

Put another way: Facebook has just removed another reason people might decide to sign up for Twitter instead of remaining content with its services. (Or, at the very least, given casual Twitter users one less reason to occasionally stray from Facebook.) The company has become a magician willing to pull anything — Snapchat clones, standalone messaging apps, improved search tools, etc. — from its hat to prevent its all-but-captive audience from checking out another exhibit.

The changes to Facebook’s search tool will likely seem weird to people who joined the network for the purpose of staying in touch with their real-life social circles. But if Twitter and other platforms (like Reddit) have shown us anything, it’s that many will also want to have conversations with interesting folks they’ve never met, and discuss topics that might not appeal to the people in their daily lives. It’s a very kumbaya-esque mission to connect people with random people who happen to share their interests as well as the people in their everyday lives.

Still, the changes are unlikely to make Twitter a ghost town. Twitter users have their cliques; they prize their follower counts; and probably value having a place where they can express an opinion without repercussion. One of the main things stopping people from having public conversations on Facebook’s platform is the “real name” policy that prevents users from hiding their identities. (Or in some cases embracing their true selves, trying to escape dangerous situations, or simply using whatever unique name their parents gave them.) Twitter and Reddit are both popular at least partly because they don’t have policies like that.

Then again, Facebook doesn’t have to win anyone’s heart or mind — it just has to hold its users’ attention tightly enough that it doesn’t wander. This improved search feature is just the latest beast it’s pulled from its hat to do just that.