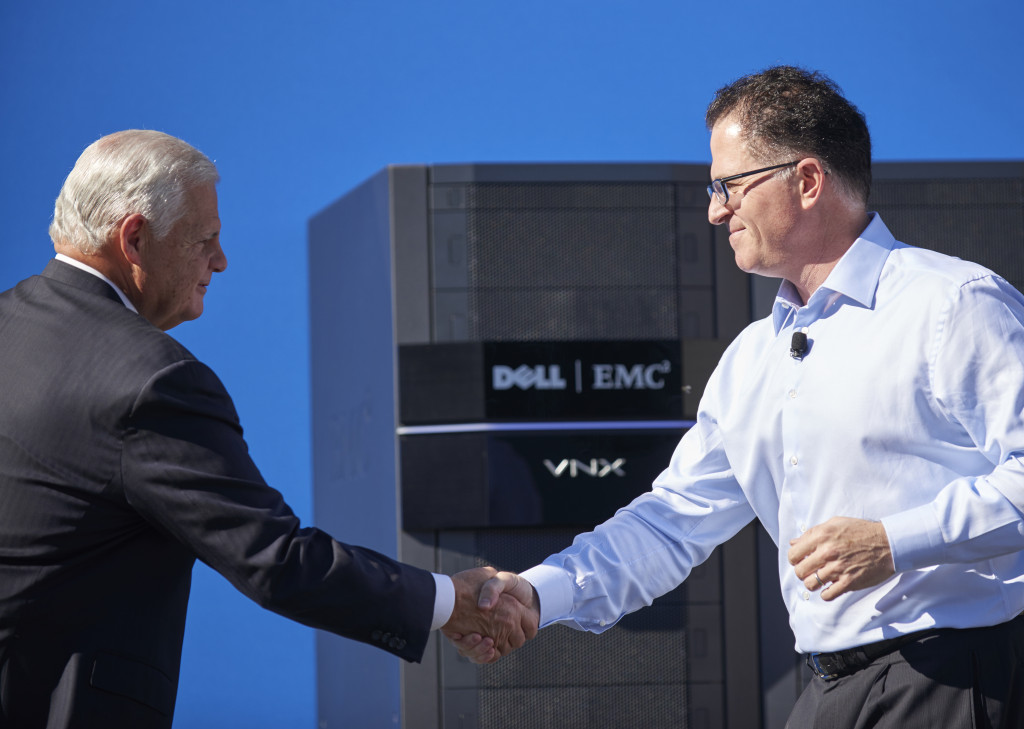 I forget about Dell. It happens all the time — I see that cheerful, round, delightfully dated logo and have something of an “remember when?” moment. Dell hasn’t been a serious part of the big consumer device discussion in years, and some of that’s by design, really. Dell isn’t stupid — it knows that its strength in the PC market is waning and that soon, there won’t be enough meat on the bone to sustain a company that just made one of the biggest pure tech deals ever.

Today, the company made it official and announced the (inconceivably huge) $67 billion deal that’ll bring it together with EMC — making it, in Dell’s own words, “the world’s largest privately-controlled, integrated technology company.” This acquisition of EMC proves total recognition on Dell’s part that devices are not it’s way forward. Instead, Dell is targeting big IT and the enterprise market.

Information Technology and enterprise are aggressively unexciting arenas for consumers, but at a time when Apple, Microsoft, Amazon, Cisco, HP, Dell and everyone else are vying for a piece of the big enterprise pie (albeit in very different ways), it’s no small part of the vast technology landscape. The Dell-EMC deal is almost inconceivably massive, with that $67 billion price tag, but also serves as a larger indicator of what’s taking place in enterprise computing: consolidation.

“The market cannot continue to sustain all of these players,” said Glenn O’Donnell, Forrester’s Research Director for Infrastructure & Operations Professionals. “It’s going to continue to shrink into a number of mega-vendors.”

Dell’s trying to claw it’s way into a infrastructure and enterprise market that’s being rapidly devoured by cloud services–most notably, Amazon’s. Enterprise is where the money’s at, but it’s not a market that’s especially friendly towards fragmentation. So, is the Dell-EMC deal a game-changing power play or a $67 billion death rattle? That remains to be seen.

“They’ve got to consider how they’re going to play as a new and different vendor. Perpetuating the old-school IT model is not going to work,” said O’Donnell with regards to Dell going forward. “In the general landscape of technology, one big question has been looming…and that is: ‘What is the future for traditional tech? Are the HPs and the IBMs and the Dells and such really in a position to succeed in this new world order where the Amazons and the Microsoft Azures and the other cloud players are taking over…More and more of the IT investment is going into the cloud services, so what does that mean for these more traditional models?”

There’s a clear divide between hardware-heavy, old-school enterprise models and the light, agile enterprise solutions that are quickly eclipsing the clunky business tools of yore. Dell’s marketplace perception has long been one intrinsically tied to the devices it makes–the physical deliverables that are becoming a shrinking line item in its revenue stream.

“That is something that they need to move their messaging away from,” said Mukul Krishna, the Global Head of Frost & Sullivan’s Digital Media Group, “from a device company…to a much more agile, reconfigurable enterprise solution, scalable partner for the technology enterprise.”

To put it simply, big business is trying to lighten up and those not willing to join the cloud game and rethink flexible, scalable enterprise systems will be left behind. “Many of the technology companies who have taken a beating because they’ve focused on a very hardware-centric approach for a long time, have been trying to figure out what they need to do,” said Krishna.

So why these two companies? And why now? Well, rumors have been swirling around EMC for some time in light of stalling growth. And Dell? It’s looking to reinvent.

“One of the main reasons that Dell went private is because it wanted to restructure itself without all of the scrutiny,” said Krishna. “Buying someone like EMC that has been for a long period and has a very strong pedigree of selling that enterprise market was a very, very good thing because they immediately solved the perception problem.”

Effectively pulling EMC off of the market will allow Dell-EMC to make decisions without the scrutiny that comes from answering to the slew of investors that come with the public trading territory.

“The major attractiveness is that by merging with Dell and taking the company private it puts EMC’s assets in the hands of an owner that understands the value of EMC’s technology and also provides clear leadership in Michael Dell (as Joe Tucci retires),” said Matt Eastwood, an analyst with IDC. “The go private nature allows the company to make long term strategic bets around cloud, security, and analytics which will be critically important for the company in the future. The investments are difficult to defend as a public company looking where investors have a shorter term horizon for their returns.”

And as a company that needs to rethink its strategy for staying relevant in an enterprise conversation that’s quickly taking off towards the cloud, that freedom to maneuver may prove to be vital. Or, shall we say, Pivotal.

Pivotal is a joint venture between EMC and its most notable offspring (VMware) and was designed to compete with the enterprise cloud giant, Amazon Web Services. Dealing in big data and cloud computing, Pivotal encapsulates much of what Dell-EMC needs to become to keep up with the burgeoning enterprise market.

“The assets and strategic direction of the Pivotal umbrella cannot be overlooked,” said Laura DuBois, an IDC analyst. ” There is a change underway in enterprises – custom applications and being written in new ways, mimicking the direction Pivotal has taken.  These new applications lend themselves to server-based storage approaches.  So Pivotal gives Dell expertise in the app dev side and Dell provides the infrastructure software and systems.”

What about everyone else? We’ve established that enterprise is a big market with big margins. Where does a $67 billion deal leave the rest of the enterprise players? In short, it may lead to significant changes in enterprise technology cooperation.

“For the broader technology market, there will be shifts in strategy and partnerships that emerge,” said Eastwood. “For example, Cisco (a long term strategic EMC and VMware partner) may need to strike deeper alliances with others including NetApp, Microsoft Citrix, etc.  At the same time, Lenovo (another EMC storage partner) may be drawn closer to IBM for their storage needs.  Longer term, I believe the merger or EMC and Dell together will create the biggest headaches for HP Enterprise as they have many of the same hardware assets but Dell will now have deeper software assets in security, data management, virtualization and software defined infrastructures.”