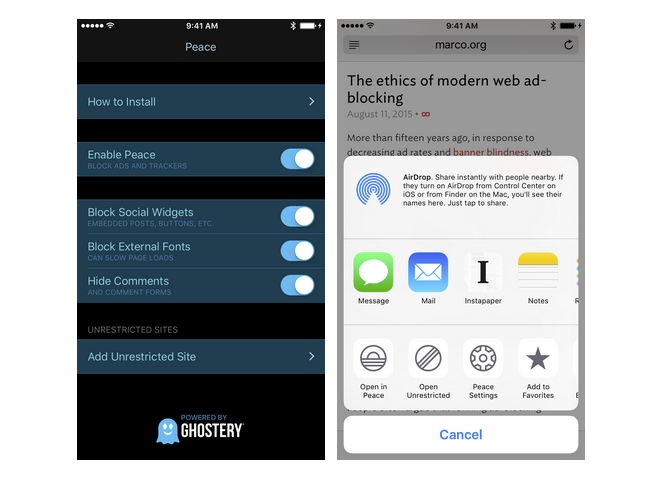 While the debate over the ethics of ad blocking tools rages on, the developer of Apple’s top mobile ad blocker app has decided to take a big step back by removing it from the App Store today.

Peace, the ad blocker app that is the subject of all this attention, debuted in the App Store just days ago with a $3 price tag, and quickly rose in popularity. Despite this, Peace’s developer Marco Arment elected to stop support for it and end further sales, which may seem a bit odd considering that he’s still in favor of ad blocking for a variety of reasons.

“Ad blockers come with an important asterisk: while they do benefit a ton of people in major ways, they also hurt some, including many who don’t deserve the hit,” Arment wrote in a blog post about his decision. “Peace required that all ads be treated the same — all-or-nothing enforcement for decisions that aren’t black and white.

“This approach is too blunt, and Ghostery and I have both decided that it doesn’t serve our goals or beliefs well enough. If we’re going to effect positive change overall, a more nuanced, complex approach is required than what I can bring in a simple iOS app,” he added.

There are numerous reason for blocking advertising via a web browser — better privacy, faster page load times, more pleasurable web browsing experience — but, there are also some consequences. One of the biggest is that smaller web publishers (news and media sites in particular) are likely to take a financial hit, as Gigaom’s Nathaniel Mott pointed out previously.

Arment is confident that those who already purchased Peace will be able to use it without problems for the foreseeable future, even without developer support. He’s also offering to refund the purchase, and lists instructions for doing so on his website.

There is no shortage of ad blocking tools available, and with Apple coming out in support of the practice, there’s likely to be plenty of activity in this space going forward. That said, Peace will probably still be missed but web users shouldn’t have any trouble finding a replacement. The bigger issue will be in getting web publishers and advertisers to change how they operate, with greater considerations for privacy, ad obtrusiveness, and the like.