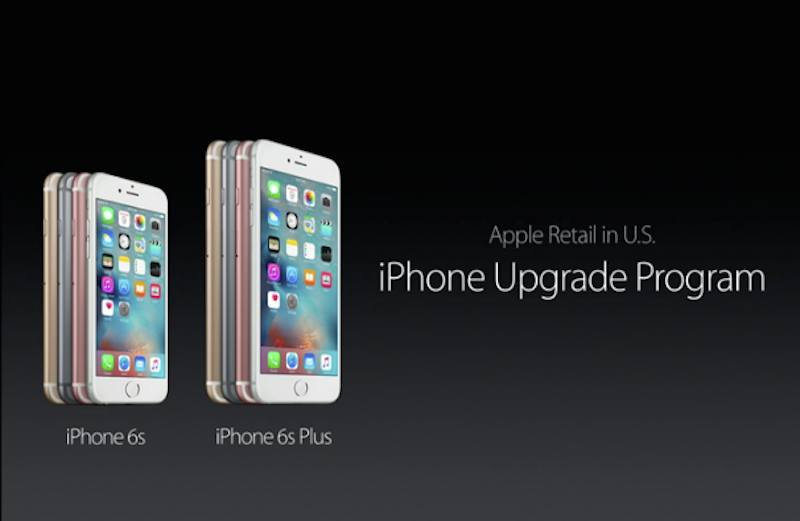 Rather than a product announcement, three words, briefly mentioned toward the end of Apple’s event last week could change the wireless industry as we know it.

That may seem crazy, considering all the shiny new gadgets that were on display, but an iPhone upgrade program from Apple– the manufacturer itself is a huge game changer — one that could help cut costs for customers, save money and boost loyalty for Apple,  and eventually force the wireless carriers to rethink how they’re doing business.

Mobile device consumers are rarely confronted with the total cost of their smartphones. iOS devices, and the iPhone in particular, are toys that come with a pretty hefty price tag. Right now a 64GB iPhone 6 costs $650 unlocked via the Apple.com retail site. Add Apple Care Plus and a two-year protection plan and you’re looking at just under $800 for a mobile device that’s already considered old, having been released a year ago.  The technologically comparable Nexus 5 retails for $375. Traditionally, carriers hide this price tag. You, the consumer, give them $200 to $400 for a phone up front — with the remaining amount being recouped in instalments attached to the service contract.

Apple’s Upgrade Program offers a different path by allowing consumers to buy the phone directly from Apple with instalment pricing. The iPhone 6S can access “23 LTE bands” which is tech-speak for the fact that it can talk to nearly any 4G LTE network available today. That, in turn, means consumers no longer need to buy the Verizon (CDMA) or AT&T (GSM) version of the phone. Instead they get their phone from Apple and take it to whichever carrier they want. Without a contract, wireless consumers can switch from one carrier to another as they see fit, carrying their phone with them the entire time.

The plan is simple but the potential for disruption is absolutely huge. Let’s look at the business implications.

During the last several years, long-term contract plans have been dying off in favor of devices that allow you to prepay the service fees through a no frills wireless carrier. While large players like Verizon and AT&T continue to battle for the top spot in post-paid consumer wireless contracts, they’re also chasing the little guy. Let’s not forget that low cost carriers like Cricket, Boost Mobile, Virgin and Metro PCS have been gobbled up in the last few years by AT&T, Sprint, and T-Mobile (respectively), as these 3 of the big 4 carriers have sought to grow their wireless subscriber numbers.

Apple’s upgrade program allows users that would have normally renewed a contract with the big carriers to go off-contract, and seek the best deal they can find with their iPhone. Without being able to lock consumers into contracts for the hottest new phone, carriers will need to compete with one another on the speed and amount of wireless data offered (Imagine that). As we’ve seen in so many industries, that sort of competition on commodity services could very well lead the carriers toward a race to the bottom.

International roaming fees? No thanks

As discussed, Apple’s Upgrade Plan for the iPhone 6S means wireless customers have phones that are truly unlocked. Not only can they choose a new carrier month-after-month in the U.S., they can also take their phone abroad — and, rather than pay for a costly international mobile data package, they can buy a local sim card to take advantage of cheap prices for local data. With AT&T currently charging $100 for 30 days access to unlimited messaging and 800MB of international roaming data, Apple’s Upgrade Plan allows savvy consumers to completely circumvent a profit center for the big carriers.

Buying an iPhone in an Apple Store has been a regular practice for consumers since 2008 when the iPhone 3G debuted. Over time, however, the consumer’s link to their contract carrier meant walking into the AT&T or Verizon store from time to time to adjust or upgrade their plans. But once within the walls of a carrier store, consumers were susceptible to up-sells to non-iPhone devices, accessories and more. Users interested in Apple’s Upgrade Program will only be able to take advantage of the deal in Apple retail stores, where they’ll be enticed by Apple watches and other premium goods on those infamous wooden tables and white-washed shelves. The carriers could very well see a significant source of incremental retail traffic dry up as the Apple Store becomes the only store that consumers frequent for their wireless needs.

Typically, when a consumer is interested in upgrading early, they sell their previous iPhone on a site like Ebay or make use of one of several online businesses that will pay the user for their old phone and then flip that phone by selling it overseas or elsewhere online for a profit.

But with Apple’s Upgrade Program, the hassle of recouping the cost of an old phone is completely removed for consumers. While the program itself is designed to leave users with a fully paid iPhone after 24 months, those who wish to get their hands on the new iPhone can renew their obligation to Apple every 12 months. That means there’s no need to list the device on Ebay or Craigslist, get it appraised by a third-party purchaser (like Gazelle), or deal with the logistics of shipping. Consumers hand over an old device to the manufacturer, the manufacturer hands them a new (better) version.

In this way, the Upgrade Program allows Apple to better maintain the supply of iPhones on the open market, which means Apple has better control on resale value and pricing. Apple has more access to refurbished products, which it can sell to emerging markets at costs that may actually be lower than what third-party resellers would pay.

Finally, there’s huge potential upside for Cupertino if the the Apple Upgrade Program takes off: Recycling.

It takes a lot more work (read: resources, energy, money, time) to scout, mine and refine 7000 Series aluminum than it does to recycle it. Let’s get back to that logistical machinery. Tim Cook didn’t rise to the rank of CEO because he was some MBA that looked good in a suit. You may recall that Cook ran Apple’s worldwide operations for more than a decade; first as an SVP and then as COO, before assuming the top job at Apple. Regardless of his title, Cook’s role was to determine how to most efficiently build and source the necessary materials. The Apple Upgrade Program falls directly in line with that mission.

When the iPhone 7 comes out, presumably in fall of 2016, Apple’s Upgrade Program consumers will have the opportunity to turn in their iPhone 6S devices and walk away with Cupertino’s new hot toy. Apple can choose to refurbish and repair these older devices, or send them to factories where they can be dismantled — at an incredible scale– using the parts and materials for future iPhone 7s, iPhone 8s, iPads, Macs or any other devices that can take advantage of them.

Remember– “Apple products are made in the most environmentally free way possible,” which means not only being free of harmful toxins like mercury and beryllium, but also being made of “highly recyclable” materials like aluminum and glass. Let’s not forget that all smartphones and other popular electronic devices depend on hard-to-find elements known as rare-earth metals like Neodymium, which are always in short supply. Apple can produce newer devices more cheaply, using discarded devices to source these materials. Such action could keep costs down while continuing to move margins up.

Is leasing/early upgrading the future of Apple’s iPhone business?

As is the case in Hollywood, the technology industry loves a sequel. The iPhone, of course, is no exception. As Apple debuted their ninth iPhone, the iPhone 6S, it became clear that while the device was compelling to consumers, Apple’s leadership team has become laser focused on squeezing as much revenue as they can out of their flagship product. Whether it’s driving users to their store with the promise of cheaply accessible gadgets via a lease model, or recycling the valuable materials within the phones, Apple is in the business of making money by optimizing the way they not only build, but sell devices.