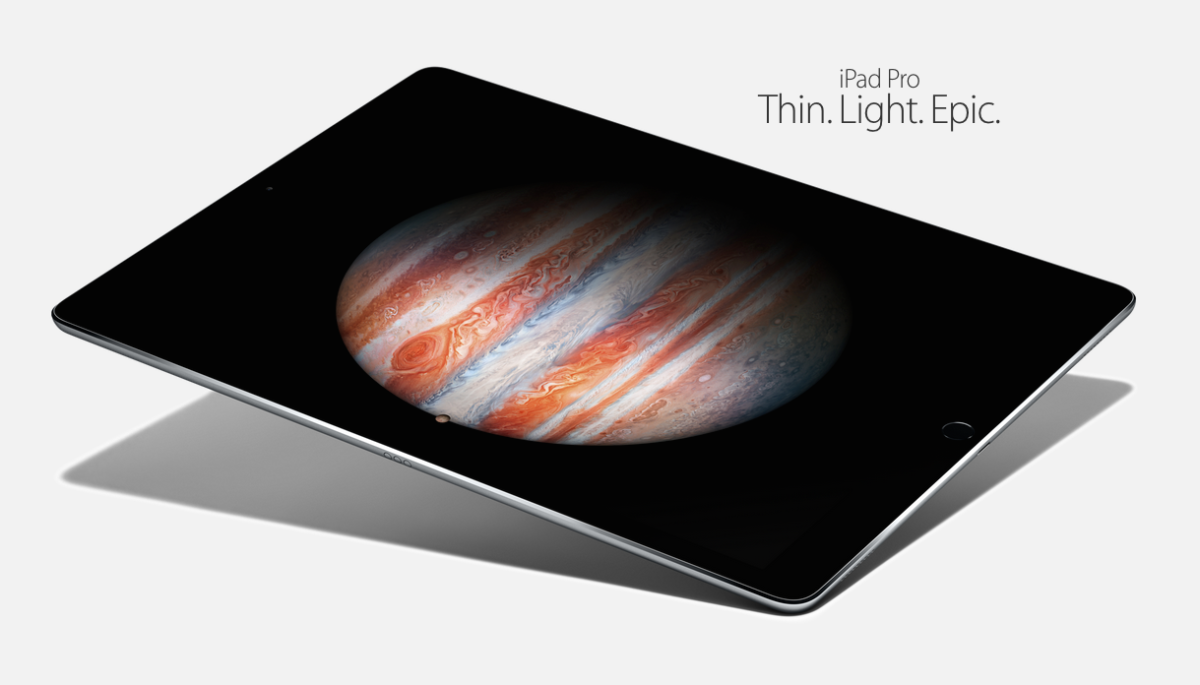 Just two years ago, Apple chief executive Tim Cook took pot shots at the rise of 2-in-1 tablets, and claimed the iPad was a far better option for anyone seeking a tablet. Oh, how things change — Apple now has a similar product, the iPad Pro.

And perhaps surprisingly, it is the iPad Pro, not Microsoft’s Surface tablet, that will be popping up in cubicles everywhere this time next year — despite Apple’s history of ignoring the decidedly-unsexy-but-still-lucrative enterprise market.

The iPad Pro is much larger than its predecessor, and was designed to work with a new Smart Keyboard and a glorified stylus called Apple Pencil. It’s basically an SUV: not strong enough for some tasks, but packed full of useful features.

The iPad Pro is a lot like Microsoft’s Surface product. Both feature displays that seem just a little too large to be convenient, both were designed with keyboard covers in mind, and both have gone to great lengths to convince people they should opt to spend between $49 and $99 on a stylus. There is one important difference, though: the iPad Pro is an iPad, and Surface products are not.

That might sound facetious, but it’s an important distinction. Apple isn’t trying to sell a new product to the enterprise customers it so obviously wants to attract with the iPad Pro. It’s trying to sell them an iPad (which many of those potential customers probably use outside of work) that was built with them in mind. Microsoft tried to establish something new; Apple is expanding a popular product — and that’s how it’s approaching enterprise.

Also, it doesn’t hurt that 70 percent of the smartphones and tablets used by enterprise workers bear Apple’s logo, according to a recent report by CompTIA . People are already using iPads for work, even though the device was designed as a vehicle for enjoying content instead of a workhorse machine. Apple’s decision to capitalize on that popularity with a new device should hardly come as a surprise.

It doesn’t hurt that analysts believe the iPad’s growth, which has slowed in recent years, will be bolstered by increasing popularity in the enterprise. Forrester Research said earlier this year that it expects business-owned tablets to represent 20 percent of the total segment by 2018; that’s a large increase over the 14 percent of the tablet market is owned by businesses this year.

All of which means that Apple products represent a large portion of a growing market segment — and that was when the company focused almost exclusively on the consumer market. If the iPad found a place in enterprise when its claim to fame was HBO Now, imagine how well it could do now that it comes with a dedicated keyboard accessory and what appears to be a rather capable stylus.

The iPad Pro is the latest example of Apple doing what it does best: waiting for its competitors to fizzle out in a market, designing a product that reinvigorates interest in the category, and then acting like those other products never even existed. The company even had a strange ally in creating that illusion: Microsoft executive Kirk Koenigsbauer, the corporate vice president of the Office division.

Koenigsbauer took the stage yesterday to show off how Microsoft’s Office productivity suite planned to support the new iPad Pro. He showed some interesting things, like PowerPoint turning doodles into presentation-worthy shapes, and expressed his employer’s excitement over Apple’s new tablet. That’s right — a Microsoft executive helped present a product that directly competes with Surface.  And since software is far more lucrative for Microsoft than hardware sales, I’m sure the company is extremely happy Apple is finally catering more toward workplaces with the iPad Pro.

Surface has just one advantage over the iPad Pro: its price. Buying a Surface Pro 3 with 128GB of storage, a Surface Pen, and the Surface Pro 3 Type Cover will cost at least $1,029 before tax. An equivalent iPad Pro with an Apple Pencil and the Smart Keyboard will cost at least $1,218. (There are cheaper options available, but these two are the most comparable, at least for our purposes.)

That’s the stereotypical “Apple Tax” that has allowed the company to make more money than its competitors. The iPad Pro will cost more, sure, but it also has access to the App Store, a bigger and better display, and other features that put it ahead of the Surface Pro 3. I suspect many people will be willing to pay extra for those features and the ability to keep everything inside Apple’s ecosystem.

There have already been jokes about Apple getting credit for something Microsoft released three years ago. (And they aren’t too far off the mark!) Apple basically just announced its take on the Microsoft Surface after it spent years pooh-poohing the idea of using a stylus or of using one device to fill various functions instead of buying an iPad, an iPhone, and a Mac for their separate roles.

Like I said, this is what Apple does best. It watches others fail, then it releases its own product and makes ungodly amounts of money on products that establish their categories in the public conscience. Before the iPhone there was BlackBerry. Before the iPad there were Microsoft tablets. Before the Apple Watch there was Pebble. And before the iPad Pro there was the Microsoft Surface. If the Pro follows the same historical pattern, it’ll probably be a knockout hit.