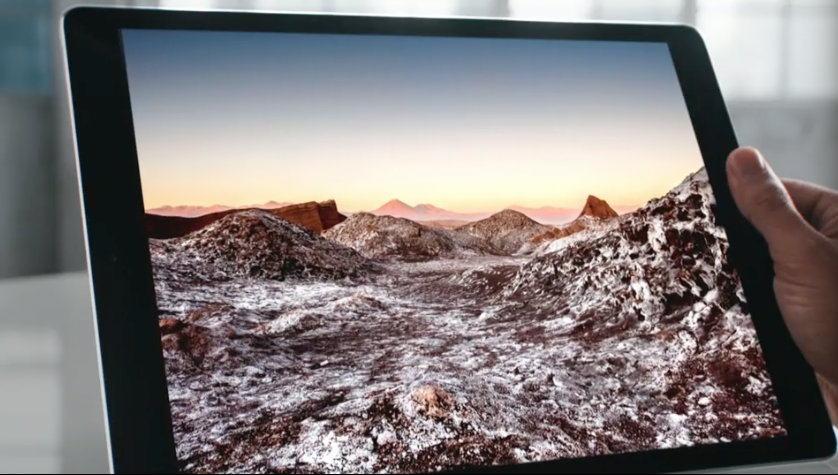 We may have known it was coming, but that doesn’t make it any less exciting.

Just after a quick update on Apple Watch during Apple’s live event, CEO Tim Cook announced what he called “the biggest iPad news in iPad since iPad.”

iPad Pro. Apple’s Phil Schiller gave us a rundown of the new addition to the iPad line.

So, what’s Apple doing with all of that room?

Well, for starters, the company is putting a new chip behind it. iPad Pro will be powered by Apple’s new 64-bit A9X processor, which is seriously quick –up to 1.8 times faster than its predecessor, the A8X. What does that mean, exactly?

Well, to put it simply, it means that this processor puts iPad firmly in the realm of desktop-class performance, with graphics that perform in console-class. Which is great, but also a necessity considering where Apple is trying to position this model.

It’s a 2-in-1 or “detachable” tablet, rather than the “slate” style (like every other iPad model). These 2-in-1 tablets are designed to be extremely productive devices meant to complete tasks normally outsourced to desktop and laptop computers.

In order to make iPad Pro a device that can bridge the divide between the power of a desktop computer and the portability of a tablet, Apple had to go beyond a big screen and a quick processor, though.

A big part of using a desktop/laptop computer is typing, which has never been ideal on iPad (or any other “slate” tablet). Now, iPad Pro has a full-size software keyboard, which should make typing on-screen faster, easier, and a bit more natural.

Still, typing on a touchscreen is far from ideal. So, Apple also announced the first in a handful of new accessories: the Smart Keyboard, a detachable keyboard with keys that feature the same technology unveiled in the new Macbook.

That brings us to the other peripheral Apple announced in conjunction with iPad Pro: Apple Pencil.

Though it functions much like a stylus (aka a dumb pen-shaped solid object with a soft tip at one end) on the surface, Apple Pencil’s tip is full of sensors that allow greater control for applications like drawing, writing, and annotating.

A key component of iPad’s productivity boost is iOS 9 (available September 16th), which will allow you to make use of that massive screen with multitasking features like easy app-switching, the “split view” that lets you view and work in two applications at once, and the picture-in-a-picture feature that allows you to watch videos whilst you work in another app.

Though iPad Pro is big and an unprecedented kind of powerful, it remains relatively lean. The new model is just 6.9mm thick, compared to iPad Air’s 6.1mm. Though it’s considerably heavier at 1.57 lbs., iPad Pro is still extremely portable.

At a time when we’re all increasingly fed up with toting around heavy laptops and chargers, iPad Pro may prove a force to be reckoned with. While its 10-hour battery life may not hold a candle to iPhone, it’s far better than the battery lives of most laptops, and it’s much easier to haul.

Of course, that’s not to say long-time Apple fans won’t have something to say about the Pro — namely how the split screen view and not-stylus stylus (aka the Apple Pencil) are things Apple founder Steve Jobs wasn’t a fan of when it came to tablet innovation. But the Pro also isn’t intended primarily for consumers, either. It is, perhaps, the company’s most direct attempt to court enterprise customers to date.