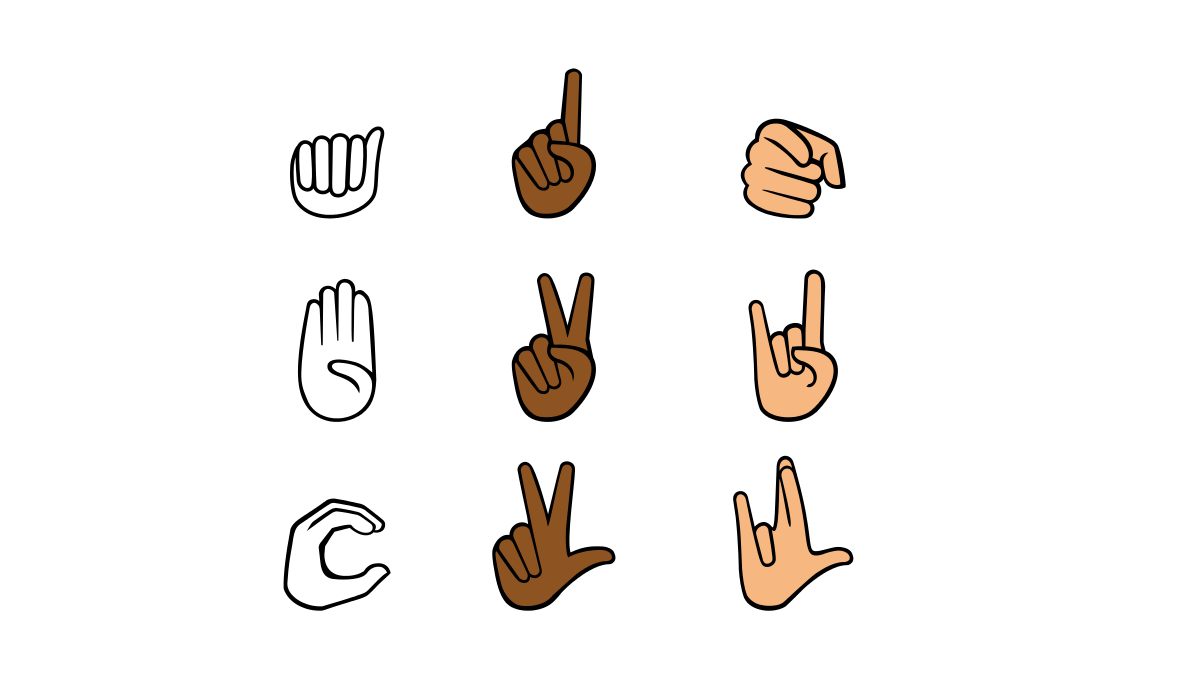 Attempting to create a universal glyph-based language for human beings in the digital age is a noble endeavor. But unfortunately, the entity behind our semi-ubiquitious emoji system, Unicode, sometimes comes up short — forcing us to push the language forward ourselves.

Though members of the deaf and signing communities can, and do, communicate digitally via text and e-mail, there are instances in which words don’t quite translate expressions in sign language. And so, one organization stepping up to bring sign language into the emoji space in an effort to simplify digital communications with ASL. Enter Signily, a keyboard that includes basic American Sign Language handshapes.

Signily is a part of the efforts of ASLized, a nonprofit that focuses on advancing ASL within the digital landscape and in visual media by creating learning and teaching tools and preserving the history and culture of the language.

One of the latest attempts to augment the emoji experience is Signily, a keyboard that includes basic American Sign Language handshapes.  Signily is a part of the efforts of ASLized, a nonprofit that focuses on advancing ASL within the digital landscape and in visual media by creating learning and teaching tools and preserving the history and culture of the language.

“For a long time I would type abbreviations in English to describe how I would sign in ASL,” says Suzanne Stecker, creator of Signily and lead for the project. For example, typing “You 8585″to another deaf person to say “You’re so good at what you do!,” or she would get creative with existing characters like “\|,,|” (aka I love you).

“In ASL, there is only one handshape that represents those three words. That’s the beauty of ASL,” she adds.

Knowing that there must be a better way to communicate digitally with ASL than using numbered shortcodes or symbols to convey and approximate handshapes, Stecker created an emoji-like glyph system that displays common handshapes precisely.

The Signily keyboard includes handshapes for the alphabet, numbers 1-30, and some common phrases, such as “I love you”, “What’s up?, and even “Live Long and Prosper” (you all know that one). The keyboard also allows you to change the skin tone of the hands and toggle between right and left handshapes.

At their best, emoji keyboards that are intended to augment language help us communicate in ways that are more nuanced, more natural, and more personal than words on a screen. Signily is ushering a new language into the digital communication paradigm, helping the signing community use technology to replace the time consuming process of using numbered shortcodes, typing makeshift handshape emoji, and making and sending videos to in order to communicate with ASL.

But Signily is more than just images of handshapes, though. These emoji are GIF-based, because movement is essential ASL. The GIF-based Signily emoji symbols capture meanings in motion — the meanings and expressions that don’t always quite translate to written language. Sign language is rich and expressive, and now, a part of it lives within the world of emoji.

However, even though Signily has helped fill a need within the signing community, ASLized is pushing Unicode for the inclusion of basic handshapes in the universal emoji set.

“One may wonder if ASLized is trying to make their own app obsolete as they push their handshapes into Unicode,” Stecker says. “The answer is no. Unicode Consortium will most likely incorporate basic ASL handshapes such as A-Z, 0-9 and ILY, but they also have other sign languages to consider as well.

“Ever since Signily’s release, ASLized has been educating the signing community about the differences between emoji in Unicode and Signily’s GIF-based emoji,” Stecker says.

In the midst of overwhelming data collection, tailored ads, and branded content, it’s easy to look at new applications of technology and feel discouraged. We see advertisers everywhere, foisting their messaging into our communications uninvited. We see our authenticity compromised and co-opted by those who seek to sell us something, to “bundle” our essential us-ness into something marketable. But then, something like Signily emerges and reminds us that sometimes, the intention of technology isn’t to sell, but to create progress and make something like saying “I love you” in simple for the signing community just because, well, it should be.

And truly, progress is never as beautiful as it is when technology meets us where we’re comfortable and brings a level of humanity to our culture of burgeoning innovation.