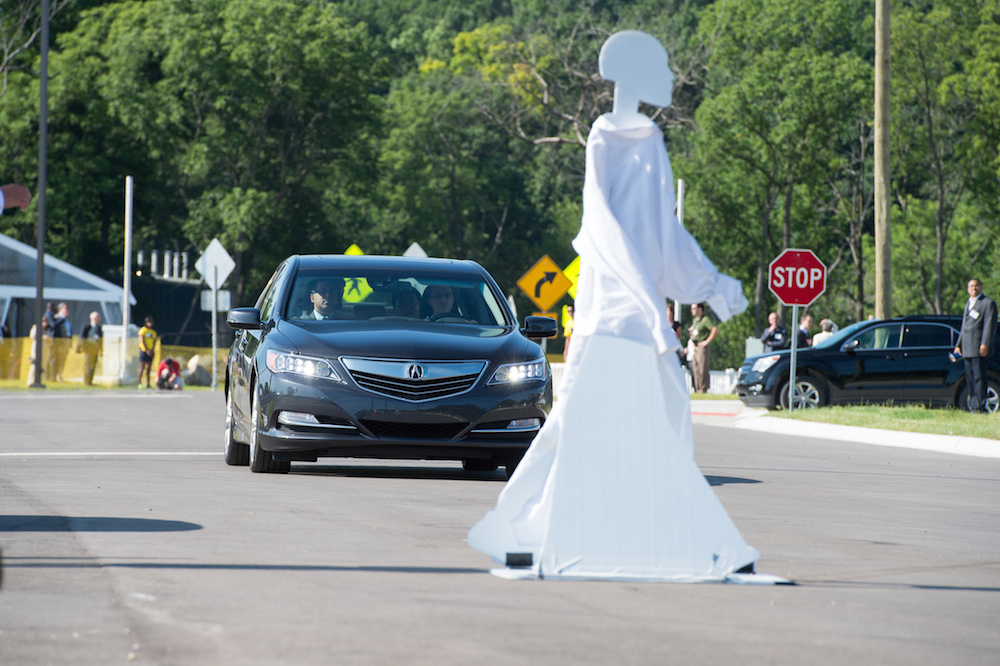 Driverless cars that know our schedule well enough to arrive at our front door exactly when we need one, that allow us to work or read or even sleep while we commute safely to work — that’s Silicon Valley’s dream for the automobile. Intelligent, autonomous, powered as much by code as fossil fuels.

Only, it can’t happen until the necessary technologies are fully tested — not in the lab but out on the road and under real-world conditions. That’s where the new Mcity comes in.

Mcity is a highly realistic environment comprised of dirt roads, worn asphalt, blind corners, construction zones, jaywalking pedestrians, even a tunnel. Mcity can be found not in Mountain View or Cupertino, but 30 miles west of Detroit, on the edge of the University of Michigan’s North Campus. It may look like a Hollywood backlot, but it’s much more than that.

Mcity opened last month at a cost of $10 million. It’s part of the university’s aggressive plan to make fully and semi-autonomous vehicles a near-term reality, not for the occasional Google car but for all of us. There’s also the hope that even if software eats the car industry, most of the nuts-and-bolts work remains in and around Detroit.

“There has been little work examining how to integrate the technical, economic, social, and policy considerations to permit a viable driverless mobility system,” James Sayer, deployment director for the University’s Mobility Transformation Center (MTC), told me. Mcity, he added, is one of the first attempts to do this.

Google’s driverless car experiments aside, Sayer notes that “we need to look at mobility as a complex system – not just the vehicle.”

This means Mcity is about more than just cars. It’s a public-private partnership to shape the coming integration between car, computing, and big data. Automotive companies, chip makers, and telcos have already signed up, some dropping more than a million dollars to support the university’s efforts.

We may truly be on the cusp of a transportation revolution. Radically improved commute times, radically improved safety, and badly needed reductions in greenhouse emissions are all within reach — thanks to the driverless car. What’s preventing this dream from becoming reality, obviously, is that the very technologies we stake our hopes on cannot actually be tested on the roads and in the real-world conditions that each of us face everyday. This is possible only through rigorously testing, analyzing and demo-ing these technologies in what is currently the world’s only large-scale, highly realistic road environment.

What happens when a child runs into the street? Or when a cyclist is in your car’s turn lane? Or GPS is down? How easy is it for someone to hack your car’s braking system? These must all be tested repeatedly, under real-world conditions, and not just by a party hoping to make a profit off their success.

A spokesperson for Mcity would not confirm if Google is involved with the project — Google co-founder Larry Page is an alumni — but she did tell me they are vetting additional companies that are interested in testing out their auto tech. Honda, Qualcomm and Verizon have already committed. Expect others to follow.

“Testing new technologies in a realistic off-roadway environment is an essential step before a significant number of highly automated vehicles can be deployed safely on actual roadways,” said Peter Sweatmen, the director of the University’s Mobility Transformation Center (MTC).

With Mcity, a giant step may have just been taken.