Microsoft turned in pretty good second quarter results on Monday, but its stock still took a hit after hours and into Tuesday. At time of posting, Microsoft shares were off 8.6 percent to $42.97 from Monday’s close of $47.01.

Why? After the earnings call, [company]Microsoft[/company] watchers seemed to remember that the company cash cows remain good old-fashioned Office and Windows, sales of which aren’t setting the world on fire. Sales in the company’s Commercial Division, which includes those products, missed expectations, logging “just” $10.68 billion for the quarter compared to the $10.94 billion that FactSet analysts had expected, according to Marketwatch.

Another data point: Revenue for Windows OEM versions of the operating system — which get pre-loaded on new PCs  — fell 13 percent year over year. And Windows Volume licensing revenue grew just 3 percent, as CRN pointed out.

Monday’s call was characterized as the end of the honeymoon for Microsoft CEO Satya Nadella, who took the reins in February, 2014. I don’t know about that, but there does seem to be a growing realization that replicating the wild success Microsoft had selling tons of copies of Office and Windows — either through volume licenses to big companies or at retail — will be a tough task in the cloud era where Microsoft was not first out of the gate.

On Monday’s earnings call,  Nadella acknowledged that Windows suffered a tough year-to-year comparison noting that: “As expected, the one-time benefit of Windows XP end-of-life PC refresh cycle has tailed off.” He was referring to the fact that Microsoft stopped supporting the popular XP operating system in  April 2014, and that publicized deadline probably pulled many PC purchases forward from this year.

Microsoft CFO Amy Hood cited that “comparability issue” as a headwind that will “show itself most directly as weakness in commercial licensing and most specifically as weakness in Office transactional licensing.” Transactional business refers to sales of full-licensed software to run on a PC or server, as opposed to the more incremental subscription Software-as-a-Service (SaaS) model.

So Office and Windows sales took a hit because they did well last year, but there’s more to this concern than the lingering impact of Windows XP’s demise.

At the heart of Microsoft’s problem is that, for many companies, it is just not the brand it once was. Whereas people of my era grew up relying on Microsoft Office applications, startups and young employees are less likely to use them. Google Apps is more likely their productivity suite. So [company]Google[/company] is strong in small companies, but it has also been aggressive courting enterprise accounts.

That means that, in this SaaS era, Microsoft faces a formidable name-brand competitor that can compete with it on price. The days of Microsoft being able to demand a premium price are over.

The company is doing lots of smart things to try to remedy the attention deficit among young companies. Its decision to go “freemium ” with PowerBI is smart, but then again the prospect of free software won’t endear it to Wall Street analysts, a constituency that was thrilled to see Nadella replace Steve Ballmer at CEO.

Sure, Microsoft can claim progress in cloud with Azure infrastructure as a service — but that comes from a small base of users compared to the [company]Amazon[/company] Web Services juggernaut. So when it says its cloud business hit a $5 billion run rate in the second quarter it’s worth noting, but with a grain of salt. Cloud numbers from legacy vendors are fluffy at best as they typically include a lot of legacy stuff and services thrown in. Last week, [company]IBM[/company] claimed its cloud business hit its $7 billion target, a claim that met much skepticism.

Microsoft will have to keep investing in key new technologies if it’s going to build relevance for modern companies. The goal is to make sure that PowerBI or some other Microsoft product becomes as essential to a big class of users as Excel and Word did 20 to 30 years ago. And Nadella has opened up the check book — Microsoft has almost $89 billion in cash after all. Last week, Microsoft acquired Revolution Analytics, the company that backs the R language used by many data scientists. 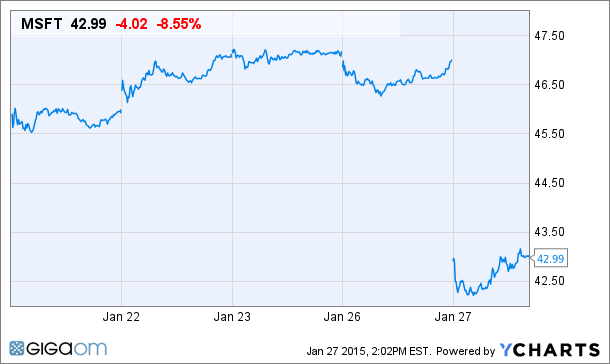