For the last week I’ve been keeping an eye on Facebook’s (s fb) and IBM’s (s ibm) market caps. On Monday August 4th, the social media giant passed the ancient, massive tech company, and I wasn’t sure if it was a momentary market fluke. After all, Facebook briefly topped IBM following its spectacular earnings call a few weeks ago, but it didn’t sustain the momentum.

This time however, the stock market shift appears a little more solid. This Friday, August 8th, the stock market closed for the week with Facebook still holding a bigger market cap at $190 billion compared to IBM at $186 billion. It’s an impressive shift, given that Facebook is a much smaller company by other metrics. It has 7,185 employees to IBM’s 431,212, $7.87 billion in 2013 revenue (with 55 percent year on year growth) compared to IBM’s $99.7 billion, and ten years of existence to IBM’s 97. 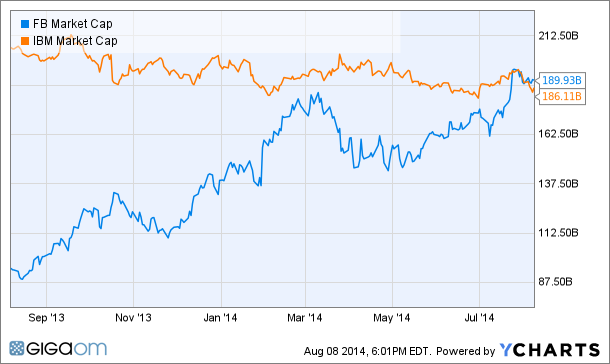 Two years ago, it would have been unthinkable that Facebook could pass the likes of IBM. But as the social media monster has grown bigger and advertising revenue has moved online, it’s become a substantial player in the U.S. economy. After its second quarter earnings call, its market cap passed the likes of Disney, Coca Cola, and Intel.

Next target? Perhaps Microsoft and its Friday closing market cap of $356B.