It’s happened time and time again: A startup comes out with a hot new “best of breed” software application and takes the market by storm. Then bigger established players develop or buy a competitive product and bundle it with their broader suite. It’s a pretty uncomfortable situation and one in which a range of companies find themselves in of late. One of them is Jive Software(s jive), which is known for its business-focused social networking and collaboration software.

So it was probably no huge shock Jive’s stock price fell 12 percent August 1 after the company revised revenue and profit guidance downward on the second quarter earnings call. UBS  downgraded the stock, same old same old, and shares fell to $6.96 per share from $7.92 the previous day. As this posts, Jive’s stock hovers around $7.11. 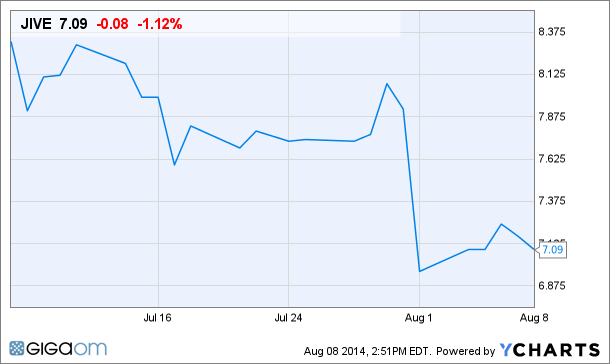 Giants to the left, upstarts to the right

Jive, which went public in early 2011,  faces a couple challenges that doubtless contributed to those revisions. First, it’s tough to compete with free. And in July, Microsoft bundled Yammer, a Jive competitor, with more versions of its Office 365 application package. Salesforce.com(s crm) is pushing its own Chatter to its CRM customers. So just like that, Jive is up against the largest application software company and the leading SaaS provider in the world. Ouch.

But that’s just one field of battle. On another front, it must contend with new mobile-first collaboration tools  like Atlassian’s HipChat, Slack and Flowdock. “They will challenge Jive because they are a: lightweight b: cheap and c: intuitive,” said Gigaom Research analyst Stowe Boyd.

Alan Lepofsky, VP and principal analyst with Constellation Research, said customer prospects fall into two camps. “The first is companies looking looking for something new and are trying to avoid their existing stacks,” he said via email.

These customers typically evaluate startups like Jive or perhaps Tibco’s Tibbr and then choose whichever offers the best integration with their other tools and intranet. Chatter and Yammer are also available independently, so a Microsoft shop could theoretically use Chatter, for example.

The second camp is companies that realize social is no longer stand-alone category and so go to their existing vendor — IBM(s ibm), Microsoft, SAP(s sap), Oracle(S orcle), Infor or Salesforce.com — to use that vendor’s product. Each of those aforementioned companies now field what he called very strong collaboration products.

On its earnings call Jive also disclosed that John McCracken, SVP of worldwide sales will leave at year’s end. That news came five months after McCracken assumed the duties of James Larson, president of worldwide field operations, who left the company in March to become CEO of Birst. Churn atop the sales organization tends to make people nervous.

But, Elisa Steele, Jive’s EVP of marketing and product, said Jive’s product integrates with both Microsoft and Salesforce.com products and that many shops prefer not to lock into one vendor for everything.

And, as for McCracken, his is a planned exit and he’s working through a six-month transition of responsibilities to his successor company insider Chris Masino, she said.

Still, it’s hard to argue that Jive isn’t under stress. It may even be on the market.

In March, Re/code reported that Jive had hired Frank Quattrone’s Qatalyst Partners to explore its options. In May, its partnership with Cisco Systems sparked talk that Cisco would buy it. Later that month, Marketwatch reported that SAP had ended exploratory acquisition talks with Jive, seeing too much overlap in the companies’ product lines.

The company’s enterprise value,  a figure often used as a measure of a theoretical purchase price, is now  about $418 million down from $1.5 billion two years ago (see chart below.) 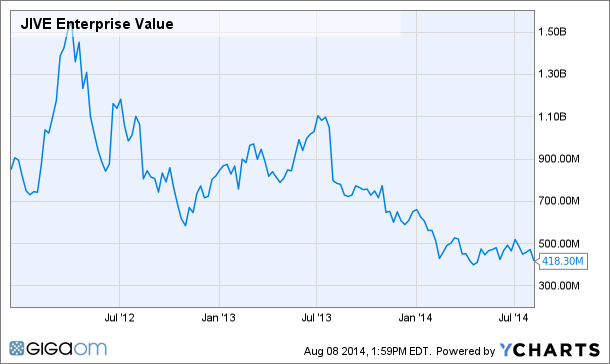 Software-defined wide-area networking, or SD-WAN, is a flexible, enabling solution transmitting packets of data over various pathways based upon predetermined factors. Traditionally,…

The largest global public cloud providers all have services that provide customers with a vSphere cluster inside the provider’s data center. These…

Developed in-house from the ground up and released in February 2019, Grey Matter is an enterprise-proven, universal service mesh networking platform offering…

Kubernetes is the de facto standard for container orchestration, and it’s being used by born-in-the-cloud startups and cloud-native enterprises alike. In 2021,…