Juniper CEO Kevin Johnson plans to retire, he said Tuesday. The news came Tuesday after the networking company beat Wall Street’s estimates during its second quarter. Johnson will stay at the helm until Juniper’s board finds a replacement. Juniper may have experienced a good second quarter, with revenue of $1.15 billion, but the firm has seen its market share in major product lines slip.

It’s also trying to position itself for a huge shift in the networking world brought about by the rise of software-defined network as well as the potential challenge of commodity networking boxes enabled by Open Flow switches. Juniper earlier this year moved to address some of these issues with a shift in how it sells its gear — instead of selling expensive boxes with software baked in, it will sell the gear and, in a separate transaction, sell software for those boxes based on a licensing model familiar to enterprise software. Customers will buy a license and then pay a maintenance fee.

Johnson has been the CEO of Juniper for the last five years, and said he is stepping down because it’s a good time for the company to transition. It may be because the stock has stayed fairly stagnant during his tenure, despite the increasing importance on the network.

In a statement he said:

“Networks are being transformed by the rapid increase in traffic volume, cloud computing and the mobile Internet and we are entering a fresh cycle of customer investments in the network. With this positive momentum, I believe it is a good time to transition to new leadership and drive the next phase of Juniper’s growth, and I look forward to working with the board to ensure a seamless transition. I am confident in the current strength and long-term potential of Juniper’s business, as evidenced by the results of the most recent quarter and the company’s proven ability to innovate and execute.”

Here’s how Juniper’s stock has done over the last five years: 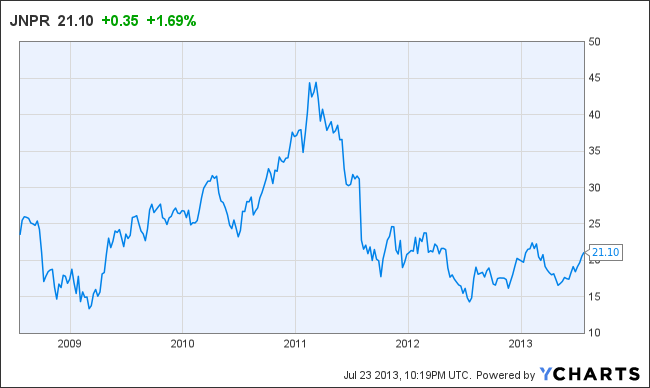 2 Responses to “After setting Juniper up for the new networking era, CEO Kevin Johnson will step down”