Google (s goog) is still quite profitable, but an ongoing shift to mobile computing continues to chip away at the profitability of its juggernaut web search ad business.

The company announced its second quarter earnings Thursday afternoon, reporting $11.1 billion in revenue excluding traffic acquisition costs. Total revenue was $14.11 billion, compared to analysts expectations of revenue of $14.42 billion. But earnings per share, excluding one-time costs, came in much lower than expected at $9.56. This compared to $10.16 in the second quarter of 2012, and analyst expectations of $10.78.

The key number for Google is the cost-per-click metric, which came in 6 percent lower compared to Q2 of 2012, and 2 percent lower than last quarter. However, paid clicks were up 23 percent over the same quarter in 2012, and 4 percent up from the previous quarter. Roughly, cost-per-click reflects the average price of a Google ad, while paid clicks indicates the number of times Google users clicked on those ads.

On the earnings call Thursday, CEO Larry Page expressed a lot of optimism on a wide range of Google’s businesses, despite the disapointing numbers. He was particularly excited to talk about Google’s Project Loon, an effort to provide internet around the world through balloons, and Google Glass:

“That’s why I love wearing Glass. Because I feel like every time I’m wearing them, I’m living in that future.” Although Page acknowledged that for a large company, turning crazy dreams into reality can be a challenge. “It’s pretty easy to come up with ideas, but it’s pretty hard to make them real and bring them to people.”

As Google makes the transition to mobile, Page highlighted some statistics on the growth of Android in particular, with 900 million Android devices now activated worldwide, and 1.5 million new ones being added every day. He said the Google Play store hit 50 billion downloads (up from 48 billion at Google I/O, but slightly behind Apple, which hit the milestone in May.) He said Chrome now has 750 million users.

“We live in a world of abundant computing, with multiple operating systems and increasing numbers of devices.  It is a very different environment from when Google started,” Page said. You can read his full remarks from the beginning of the call, which he posted online.

In after-hours trading, Google’s stock was down 4 percent on the shortfall compared to analyst estimates. Google doesn’t provide its own estimates for financial performance, as a fair amount of companies do. 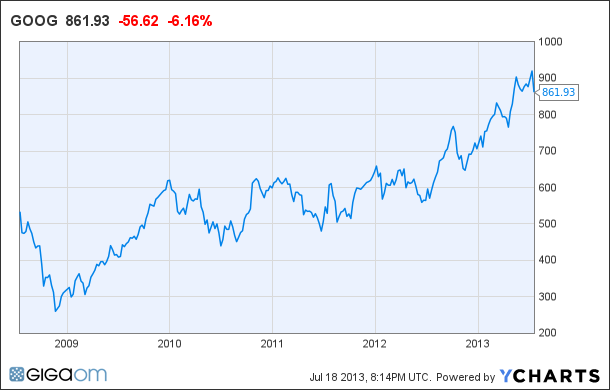