VMware’s (s vmw) push into the hyper-competitive enterprise cloud space comes at an interesting time for the server virtualization leader. A growing list of factors — the continuing exits of key execs, the fraying of alliances with partners, and the looming presence of Amazon Web Services (s amzn) — means it has to step very, very carefully if it is to have an impact.

The problems aren’t hard to spot. VMware’s bread-and-butter hypervisor technology is a now a low-cost commodity. Its licensing/pricing model makes much of its other software more expensive than good-enough alternatives. Its ability to navigate and perform is constrained by organizational squabbles and a complicated relationship with parent company EMC (s emc). And its rapport with hundreds of partners is even more complex especially as more of those companies have come to view VMware as more a rival than a teammate.

VMware is also late to the cloud party after several attempts to establish vCloud Director as as standard piece of infrastructure for service provider partners. This strategy met decidedly so-so results. Most service providers, telcos and hosting companies that offer vCloud Director also field other, less pricey options. And many of those providers also now view VMware’s vCloud Hybrid service as a direct competitor to their clouds.

If you were one of those companies, would you want to field technology provided by someone coming into your market? Probably not. As one VMware cloud partner told me: “Yeah we offer vCloud. No one uses it.” Harsh.

Server virtualization alone won’t do it

VMware vSphere server virtualization has huge market share inside corporate data centers so, in theory, those companies might look to VMware as a cloud provider as well. The sales pitch is that there will be seamless workload flow between those internal servers and VMware’s cloud. But many of those VMware customers don’t want to devote more of their IT budgets to VMware. Many are still sore about VMware’s abortive vRAM tax which — to be fair — was rolled back nearly a year ago. And yet the bellyaching goes on.

The new vCloud Hybrid Cloud will compete directly with enterprise-oriented cloud offerings from HP(s hpq), Microsoft(S msft), Rackspace(s rax) and Red Hat(s rhat). And, of course with Amazon(s amzn)Web Services which clearly has its eye on enterprise workloads. 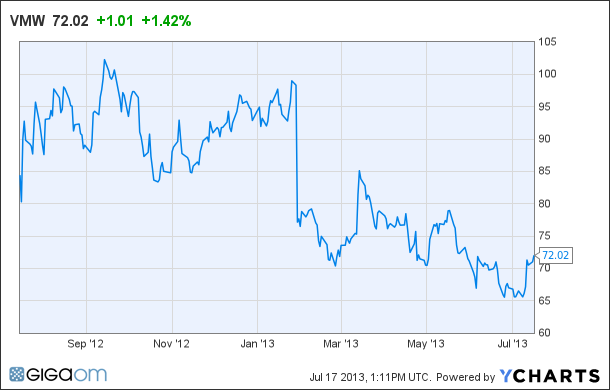 Lets look at the virtualization underpinnings of those other clouds. While most will support multiple hypervisors, Microsoft obviously favors its own Hyper-V, Red Hat and HP are backing KVM and Amazon runs a flavor of Xen. Who’s missing here?

Vanessa Alvarez, VP of marketing for Scale Computing and a former Forrester analyst, thinks VMware is in for a rude awakening from its partner base who are, in her words, fed up. Indeed, I’ve picked up much of the same sentiment in the course of my calls over the last few months

“VMware’s about to get the kiss of Judas from its partners — they are all looking elsewhere, hoping that Hyper-V and KVM can meet their requirements,” she said. And that day is near, given the growing number of vendors embracing these alternatives. Simplivity, which makes a data center appliance that converges several workflows, came out as a VMware-only machine but is adding Hyper-V support soon — a factor that led T-Systems Czech Republic to adopt the product.

All eyes on Gelsinger

The man who has to manage all this, VMware CEO Pat Gelsinger, says the right things — that VMware will work with partners while offering the best enterprise cloud possible. But he has a hard time selling that message. A few months ago, he told VMware partners that working with his company is preferable to watching all their joint business flow to Amazon Web Services.

To prove VMware’s partner bona fides, a spokesman touted several recent partnership alliances, with Lenovo, with Dell, with SAP and with MapR, as proof of its good corporate partnership policies. But press releases are one thing — execution is where the rubber hits the road.

And quite simply, it’s hard to find someone — even in the VMware ecosystem — that has a good word to say. I get comments all the time in the course of my calls — the majority of which don’t even focus on VMware — from vendors who proactively bring up the company’s name in vain. I haven’t heard this much back-biting since the days of the Microsoft antitrust trial (and before) when Microsoft-bashing was at its height.

VMware’s stock price isn’t helping any of this(see chart.) Neither is the flow of top execs out the door, the latest being Bogomil Balkansky, the company’s much-respected cloud and infrastructure go-to guy, who left for (of all places) a stealthy startup funded by VMware co-founder Diane Greene. He followed former CMO Rick Jackson (who joined Rackspace) out the door.  CTO Steve Herrod left in January, but at least he went to a VC firm, not a direct competitor.

The company clearly sees the writing on the wall — it can’t ride server virtualization forever and so is banking big on storage and networking virtualization — all key to its vision of a software-defined data center. Dana Gardner, principle of Inter-Arbor Solutions and a GigaOM PRO analyst thinks VMware has some cards up its sleeve.

“Given that software-defined-X is a major part of making efficiency, lower cost, and convergence happen, VMware has a lot of upside in the datacenter,” he said via email. But, he added, that being said, “there is a huge question mark across the IT landscape on how the transition to hybrid cloud, PaaS and public cloud pans out — for buyers and seller alike. Being the VM leader is a strong place to work from, but in itself is not enough to guarantee similar market position in private cloud and IaaS.”

Some executive departures are just the cost of doing business. The company’s most famous refugee (after Greene herself) is former CEO Paul Maritz, who left to lead VMware and EMC’s Pivotal spin off, so at least he’s still on the reservation.

But you’ve got to wonder about VMware’s ability to retain and attract top talent given all this action. And whether the company is in a downward spiral or, less likely, is mounting a resurgence.