Wall Street analysts piled on Microsoft(s msft) after new research showed how low the PC market could go. On Wednesday, IDC pinned at least part of the blame for bad PC sales numbers on sluggish Windows 8 adoption. Microsoft shipped Windows 8 in November and made a big bet to create Surface, a business-friendly tablet alternative to Apple’s popular iPad(s aapl). Right now, neither of those bets is doing very well.

On Thursday, Goldman Sachs downgraded Microsoft shares to “Sell” from “Neutral” and Nomura Securities cut its call to “Neutral” from “Buy.” The moves came a day after  IDC called the first quarter of 2013 “the worst quarter” ever, with PC sales down 14 percent from the year-ago quarter. (Gartner(s IT) numbers were slightly better: it had PC sales only off 11.4 percent year over year for the quarter.)

“At this point, unfortunately, it seems clear that the Windows 8 launch not only didn’t provide a positive boost to the PC market, but appears to have slowed the market,”  Bob O’Donnell, IDC Program Vice President, Clients and Displays said in a statement. (Full IDC statement here.)

Long-time Microsoft watcher Rick Sherlund at Nomura Securities wrote that the combination of “sluggish” Windows 8 adoption and the “lack of compelling new hardware is disappointing with no relief likely” until later this year when Intel(s intc) releases the new Haswell notebook processor.

As if on cue, the Wall Street Journal (subscription required) reported that Microsoft plans a new 7-inch Surface tablet to come later this year.

Updated: To be fair, for the first quarter, IDC also acknowledged that industry darling Apple(s aapl) also faded. While it did better than the overall U.S. market, IDC said shipments of Apple PCs  slipped 7.5 percent — apparently because more people are opting for iPad tablets as PC replacements. 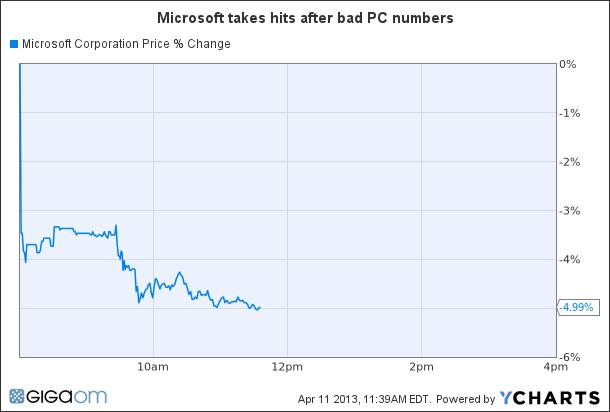 This story was updated at 6:54 a.m. PST with Apple PC share decline.

Cloud computing and the accelerating pace of development, particularly in response to effects from the global pandemic, have been key drivers behind…