No wonder Michael Dell (and friends) want to take his company private.  According to the company’s proxy, Dell must invest heavily in tablets — where Dell has thus far fallen short — and other areas to get competitive. But investing heavily is just the sort of thing that spooks shareholders of the beleaguered PC-and-server maker. Big time.

“Mr. Dell and Silver Lake intend to pursue a more aggressive PC/tablet strategy and invest significantly in the enterprise segment. Consequently, earnings could be weak for two or more years, which would not please the public market.”

The Dell proxy lays out a raft of problems besetting the company including a “deteriorating outlook for the PC market” due  in part to the cannibalization of PC sales by smartphones and tablets. It also mentioned a faster-than-expected decline of PC sales into emerging markets, uncertainties around Windows(s msft) 8 adoption and slower Windows 7 upgrades. As a result of all that, Milunovich is reducing his earnings estimate for Dell’s 2014 fiscal year from $1.70 to $1.30 and cut his estimate for the following year to $1.12.

The Boston Consulting Group, according to the proxy, warned Dell management of a shift to cheaper products and services in its “end user computing” (EUC) business. BCG concluded that “as a result of a likely persistent decline in the premium segment of the EUC business, unless [Dell] changed its strategy to become more competitive in the lower-margin segment… [it] would require years of aggressive restructuring in order to maintain its value, and would face the risk that its decreasing scale would render it less competitive.”

BCG said Dell’s Enterprise Solution and Services (ESS) business also to invest in research and development and hire a bigger sales force. As we all know R&D and enterprise sales folks are pricey. All Things Digital has more on the proxy’s depressing take. 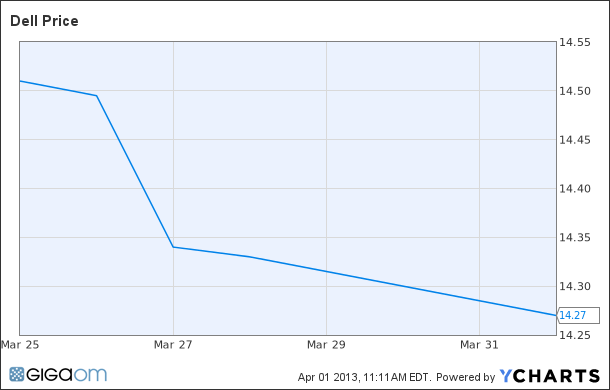