Change — rapid, visceral change — is one of the most exciting things about the technology industry; when hard work and incredible foresight combine in a product or service that changes the world in just a few years and makes a lot of people rich in the process. Maybe that’s why when we see a company responsible for such profound change start to mature, we get a little uneasy.

It has been a little over six years — an eternity in tech — since the late Steve Jobs stood onstage at San Francisco’s Moscone West convention center to announce that “today, Apple is going to reinvent the phone.” Already in good shape thanks to the success of the iPod, the iPhone (and later iPad) turned Apple(s AAPL) into something Silicon Valley and Wall Street had never really seen: a big, profitable consumer tech company growing at a surreal pace.

That party isn’t exactly over, but those who just stopped in for some quick fun are looking for their coats; at least based on Apple’s quarterly results this past week and the reaction from investors and supporters to a steep drop in Apple’s stock price over the last several weeks and months.

Apple is maturing, and that’s starting to sink in among those looking to play the market for a quick buck, those with genuine respect and admiration for what Apple has accomplished, and those in the media who have built audiences around the intense interest in Apple during that period. Apple’s surge in profits, market share and market capitalization over the last 10 years was unlike anything most of us have seen, and the prospect that such an incredible growth story might be coming to an end is disappointing; not to mention a little scary for those whose job it is to find those growth stories.

We won. Now what?

The mobile revolution ushered in by the 2007 introduction of the iPhone is old news, in a way. Worldwide smartphone sales are still growing at a healthy 36 percent clip, according to IDC, but that growth has slowed as more and more people embrace smartphones over basic mobile phones. There’s still a ton of growth ahead for tablets, which are clearly having an effect on the PC market, but it doesn’t look like tablets will be as profitable for manufacturers (including Apple) because of how smartphone prices are distorted by carrier subsidies. 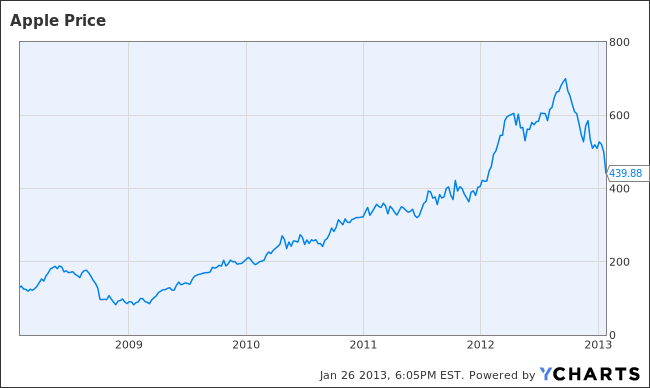 As with many things involving Apple, these trends tend to be used for partisan purposes.

Investors who only care about growth — and not necessarily technology — seem to have decided to go find the next big growth stock somewhere else. As they sell off their holdings, the slumping stock (which still closed Friday 228 percent higher than it was in January 2008) triggers a bunch of Wall Street-oriented stories wondering, “What’s wrong with Apple?” That in turn leads to a very predictable and usually heated backlash from Apple’s army of supporters who mock Wall Street types for assuming Apple is doomed despite record revenue, profits and mobile sales. And then those who have been desperately trying to write the “Apple has peaked and is headed down” story in order to look prescient are licking their chops. Page views for everybody.

Nothing is wrong with Apple. And no one is suggesting (with a straight face, anyway) that Apple is doomed. Instead, we’re seeing a different type of Apple emerge, one that is still growing very strongly but that is no longer attached to a rocket ship.

This realization is hard to accept for both financial and tech types alike. Investors who hunger for exponential growth now have to figure out what to do next, and it’s no surprise that some of those pushing Apple to release a mind-blowing television are financial types hungry for the same type of growth that was provided by the iPhone. (Should that actually come to pass, maybe Apple still has some rocket fuel left.)

Apple’s supporters (and detractors) must come to terms with the fact that we’re now well into a different era in Apple’s history. The iPhone caught the mobile industry flat-footed in 2007. Six years later, major competitors have righted themselves and beautiful hardware and software is battling for prominence with compelling services delivered onto those handsets and tablets.

I feel like the mobile world in early 2013 is a little like the PC market of the mid 1990s, say the period around when Windows 95 had arrived. PCs were not a novelty then, but nor were they in every house in the land. And there was still a ton of growth and innovation ahead as desktops grew more powerful, laptops grew more capable, and the browser connected it all. That mature-but-still-growing market continued for about a decade before the mobile computer became the new darling of the industry.

Today, even though the iPhone is a household name, smartphones in general still make up less than half of all the mobile phones sold worldwide. And the tablet market has huge potential. The days of 70 percent growth in these markets are probably over, but there are still a lot of years of strong growth ahead.

By 2018, who knows how this crazy industry will have changed again. But Apple will either lead the pack or be a strong contender for those mobile customers over the next several years. And at some point, Apple’s stock will come into balance with its new identity.