There probably isn’t a worse time in which to be a special interest lobbying for program funding than the final few weeks of 2012. But that’s exactly what the American Wind Energy Association (AWEA) has to do as it begs lawmakers to include its 2.2 cents per kilowatt-hour tax credit for wind power in whatever fiscal deal Republicans and Democrats reach.

And in a sign of how much it’s reaching right now, the AWEA proposed not a full extension of the subsidy but a phase out beginning in 2014 and running through 2017. What’s unfortunate is that the AWEA is right when it notes that not extending the Production Tax Credit (PTC) will result in job losses and contraction in wind power deployment.

The AWEA paid for a study from Navigant Consulting, which concluded that a failure to extend the PTC would cost 37,000 jobs next year and would reduce wind investment from $15.6 billion in 2012 to $5.5 billion in 2013. And if history is a guide, the study will be accurate. The PTC lapsed in 2000, 2002, and 2004 and as the bar graph below shows, indicating annual capacity installations, those were years in which wind installations fell through the floor. 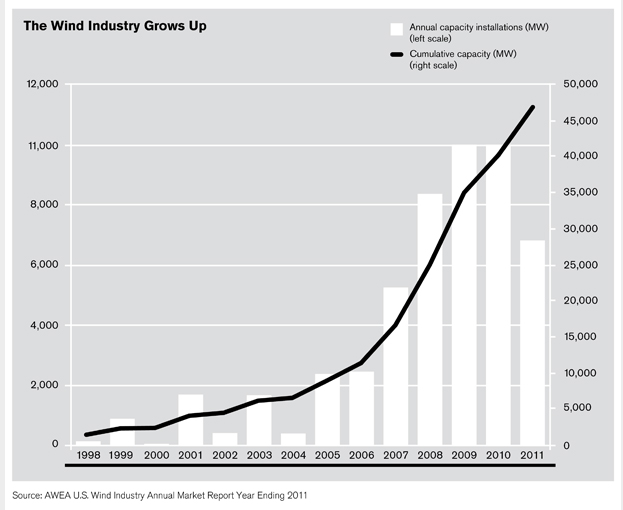 What’s unfortunate is that wind power hasn’t yet reached grid parity with fossil fuels though it’s certainly the most price competitive renewable energy, with the exception of hydro. Looking at the Energy Information Agency’s estimated levelized cost of new generation resources for plants going into service in 2017, we see that wind costs about 9.6 cents per kilowatt-hour, which is about what conventional coal costs but still about 3 cents above natural gas power pricing. Solar PV still sits at around 15 cents per kilowatt-hour. 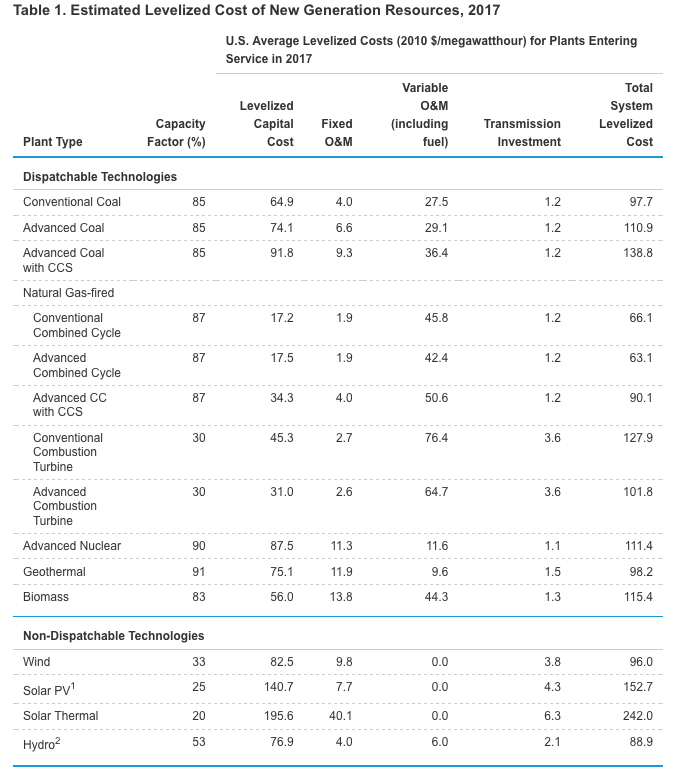 The EIA’s estimates highlight how even as renewable energy pricing is making progress against coal power, it’s now up against coal’s fossil fuel cousin, natural gas. It’s likely that we’ve seen the bottom of natural gas pricing this year with prices hitting decade lows of $2 per thousand cubic feet but it’s still a force to be reckoned with.

I pay attention to these figures because like most folks who spend a lot of time paying attention to cleantech, my real dream isn’t some hot new technology (though that would be cool) but rather, a moment when renewable energy is price competitive with fossil fuels. The International Energy Agency has actually modeled out what the cost of wind power will look like over the next 18 years, particularly since capital costs have gone up recently for wind power producers, compensated by gains in efficiency.

The mid point estimate from the IEA, which ran 18 different scenarios, is that by 2030 wind power should come down by around 20 percent, which would be roughly the equivalent of the 2.2 cent per kilowatt-hour subsidy the industry now gets. Unfortunately, 18 years of the subsidy would be be pretty hard to come by right now and the less subsidy the industry gets, the harder it is to bring down costs because a bigger market means more money for R&D plus better economies of scale.

The one thing the AWEA has going for it is that a lot of wind power is generated in conservative states like Texas, not to mention Iowa, a major wind state and a critical early test for Republican presidential candidates. Even Karl Rove has come out in favor of extending the credit.

So as we go into the fiscal cliff negotiations, I’m holding out the hope that the industry can find the political support to extend subsidies a bit further. Because while two decades may seem like a long time, the industry isn’t that far from being the first renewable energy truly competitive with fossil fuels.