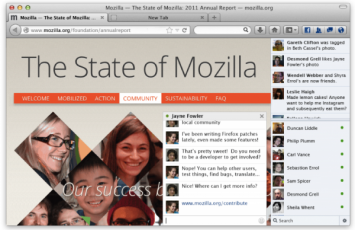 On Tuesday Mozilla introduced its latest version of Firefox, which included the rollout of a new social API.

The social API is intriguing because it allows social networking services like Facebook to create a persistent presence in a “social sidebar,” which equates to permanent browser real estate for things like notifications, updates, and even service-specific features like Facebook Messenger chat.

The closest analog to the social sidebar today is the search box. However, while a universal search box requires users to default to a specific search engine, the social API is the next step along the integration path from the extensions model used by Firefox and Chrome for third-party social services, and one could envision a number of different social services being turned on by a typical user in the future.

This move by Firefox probably relegates companies like Rockmelt, a social-specific browser startup, to the status of a web nostalgia act. After all, who needs a social browser when social features are being integrated through an API into the big browsers like Firefox?

The first company to use the social API is (surprise!) Facebook with its Facebook Messenger service. Longer term, other social players like Pinterest, LinkedIn, and Tumblr will surely take advantage of Firefox’s social API. As for other browser players,  Google (like Firefox previously) integrates social features through extensions and plugins,but I think it’s entirely possible it will follow Firefox’s lead with a social networking API of its own in future Chrome releases.

Michael Wolf is an Analyst for Gigaom Research and the founder and Chief Analyst at NextMarket Insights, a market research firm focused… More
Advertisement
Advertisement