AMD needs to step out from Intel’s shadow and it looks like it may finally be ready to do it. AMD (s arm) is prepping an event ahead of the ARM developer conference next week and the smart money is on AMD taking another ARM license to pop ARM-based chips in servers. The ARM license has been hotly debated internally at AMD all of this year, but after failing to buy into mobile five years ago, to miss the ARM revolution in servers would be suicide for the struggling chipmaker.

With the PC market dwindling, AMD has little choice but to look elsewhere, and servers might be its saving grace. While it’s a tough overall economic environment for chipmakers, Intel’s third quarter financial results from last week show that the data center is at least still a growing market. Intel reported that its PC revenue was $8.6 billion, down 8 percent year-over-year while its data center group revenue was $2.7 billion up 6 percent year-over-year. Yes, that’s a smaller base compared with PCs, but it’s still growing.

On Monday afternoon, AMD sent out an email inviting reporters to an event featuring CEO Rory Read, Lisa Su, senior vice president and head of AMD’s global business units, and a “special guest.” Given that ARM is hosting is developer conference in Santa Clara, Calif. that week, and that AMD’s invite notes that this meeting will involve discussion of its “ambidextrous strategy,” I’m hoping that it is finally biting the bullet and taking a higher-level ARM license that will give it the ability to design chips for servers — something I predicted it would do back in February when it purchased SeaMicro.

AMD has already started tiptoeing down this path with the creation of the Heterogeneous Systems Architecture Foundation back in June. It joined up with ARM to create an organization that will bring heterogeneous computing — i.e., computing that doesn’t just use x86-based chips — to the mainstream. It also has licensed a lower-end ARM-based core for use in security. So taking it further with the license of a Cortex A15, or higher-end server-capable chip, isn’t going to shock investors at this point. It may even hearten them. 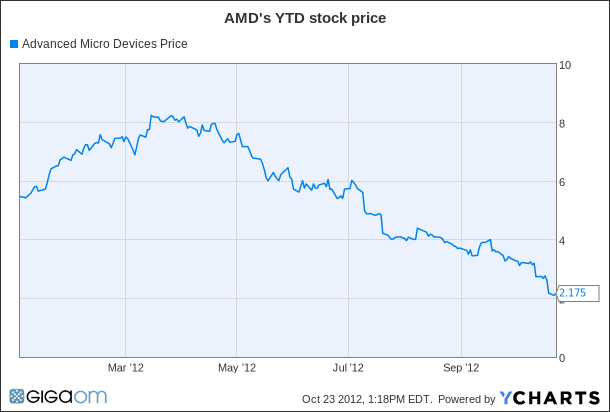 AMD has a history of innovation that has been stymied by Intel (s intc) and its own execution troubles; sometimes both. AMD brought 64-bit computing to the x86-based architecture in desktops and servers, introduced its HyperTransport technology to improve scaling of multiple cores ahead of Intel and even foresaw the importance of graphics chips for both consumer and corporate computing back in 2006 when it purchased ATI. Unfortunately it also failed to go big in mobile. AMD did purchase Alchemy, a low-power MIPS-based chip company back in 2002 as part of mobile bid, but in 2006, it got out of that business.

In a similar vein, Intel has its own ARM-based Xscale unit during that time that it later sold to Marvel. But even after the launch of the iPhone and netbooks (remember netbooks?) AMD stuck to its plan to steer clear of mobile computing. And that was a huge mistake. AMD recently said it would lay off about 15 percent of its staff, and also reported lower-than-expected sales.

Some of the blame can be laid on AMD for not embracing mobile, but there’s a larger upheaval occurring in the chip sector where industry segments that were once clearly delineated have begun to merge (like smartphones and computers) while the hegemony of the x86 architecture with its two primary competitors has waned. So there’s competition between more players and more architectures across a wider spectrum of devices. It’s happening clearly in consumer devices, but it is about to happen in servers.

The ARM servers are coming!

And AMD knows this. Last week during its financial results call CEO Rory Reed said that AMD needs to diversify beyond the PC market, where AMD faces, “a very challenging selling environment, especially in the lower end of the consumer client space.” His solution is to let AMD focus on areas such as cloud computing, embedded chips and video gaming machines. Wall Street was not impressed, with one analyst writing that AMD was simply “uninvestable.”

At this point, AMD has — with its SeaMicro purchase — systems design expertise and IP to use an ARM-based chip inside a server built for cloud computing and big data jobs. It has credible x86-based processors as well as GPU-based systems designed for high performance computing. Bringing in an ARM license and experienced ARM engineers means AMD could build machines that mix and match the most popular architectures for different styles of computing. Yes, it will compete with many more players than Intel: already Marvell, Cavium, Calxeda and other chip companies are targeting specialized chips for the server market.

Just last week Calxeda launched a roadmap that brings 64-bit ARM-based computing to servers in 2014, and says it will have ARM servers in production environments by the end of the year, while other vendors such as HP and Dell are launching ARM-based servers. I expect more news at the ARM conference next week, but the momentum around the technology is clear. After years of dithering, it’s time for AMD to bet it all on heterogeneous compute, even when it comes to its server business. Will it be enough?