Thanks to U.S. Patent No. 8,243,017 B2, “Media Controller Systems and Methods,” we now know what Apple TV 2.0 is, or will be. That was one of a series of 29 newly granted patents for Apple published this week by the U.S. Patent & Trademark Office. And it describes a system that won’t come as a big surprise to regular GigaOM Pro readers.

So what is it? It’s a highly module video processing system that can support set-top, mobile and networked implementations, fronted by a very slick (and Apple-y) user interface and remote control configuration. What it is not is an integrated TV set or any other particular device, although it could, by design, be implemented that way.

The core of the system is what Apple calls the processor unit, which consists of up to six different subsystems, or “engines”: a controller engine, UI engine, recording engine and channel, browse and search engines. Each engine can be implemented either in hardware or in software, meaning they can all be baked together into a single device or incorporated separately into various devices. 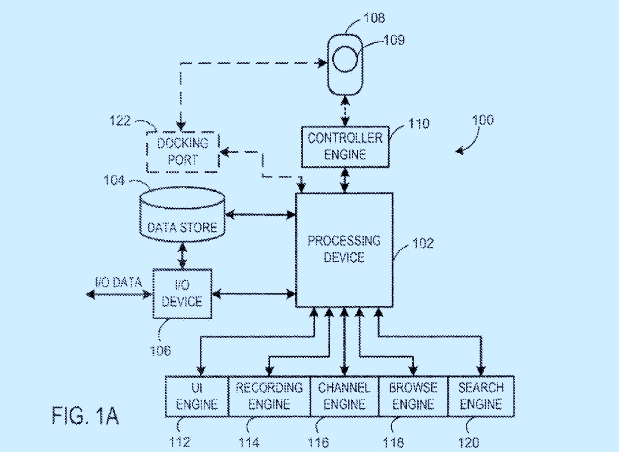 It also incorporates a “data store” for storing recorded programs, which again can either be included in the main box or supported separately. Recorded content can be moved from the data store to a remote control device with an LCD display in it for offline, mobile viewing (the remote display can also serve as a second screen during live viewing). Recordings can also be set remotely using scheduling information downloaded to various unspecified mobile device (presumably an iPhone or iPad).

The patent also describes a networked version of the system in which multiple displays and various additional components can be incorporated via wireless network.

Input can come from multiple sources and multiple service providers. The patent in particular emphasizes scenarios in which video data is delivered by cable system while metadata about the video content comes from a separate service provider.

The other critical element of the system is the unique user interface and remote. The remote looks like an iPod, with a touch-sensitive, rotational input controller for scrolling through menus and listings quickly. The menu-driven UI can be displayed on the TV screen in various configurations, such as translucent overlays while the video continues to play across the full screen, or in a sidebar while the TV picture is partly rotated to an angled perspective. Users can continue to watch the main program in perspective view while menu information and thumbnail previews of other content is displayed in the sidebar.

The effect, the patent claims, is that menus and programming options are displayed for the viewer in a highly intuitive manner, while the remote control provides for simple, intuitive inputs. 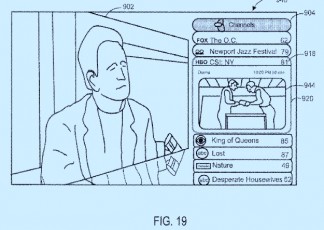 There are many other details, and many other possible implementations disclosed in the patent. But they all follow the same basic philosophy. As Apple did with the iPhone, Apple TV 2.0 is an attempt to layer a very Apple-y user experience atop a service the consumer is already paying for, in this case cable TV, without Apple having to incur the costs of providing that service. Unlike the iPhone, or even the current Apple TV set-top box, Apple TV 2.0 is not a single, discreet device but a platform that can be implemented a variety of ways, including across separate, networked devices as well as standalone devices.

Most important, it’s designed so as to be able to deliver its unique user experience independent of any particular content service or service provider. The processing components that generate the UI, menus and search features sit apart from whatever device is used to acquire the content, whether cable box, TiVo or something else. Apple obviously hasn’t decided yet exactly how to package the system, but its modular design could allow it to introduce multiple configurations, at multiple price points, featuring different levels of functionality. It also would allow the software to be incorporated into devices Apple itself doesn’t build.

Which brings us to this week’s other big “news,” that Apple is in talks with leading cable operators about letting consumers use an Apple device as a set-top box for live television. While I’m sure those conversations are going on, I doubt the discussions about the set-top box per se. It’s far more likely they concern whether and to what extent cable operators might want to subsidize Apple TV 2.0 for their subscribers, either by incorporating elements of it into their own STBs or providing a separate set-top unit, just as the wireless carriers subsidize the consumer cost of the iPhone.

Why would a cable operator want to do that? As a hedge against cord-cutting. Now that Apple has figured out how to insert its own user experience between the cable operator and the subscriber, posing a serious threat to the operator’s hold on those subscribers, cutting a deal could be the operators’ best hope of avoiding disruption.

Should cable operators cut a deal with Apple?