Update: Look out, below! Facebook (s FB) stock marked the return from the long weekend by tumbling nearly ten percent to an afternoon low of $28.87. That means the shares have lost nearly  a quarter of their value since their much-hyped debut at $38 less than two weeks ago.

The overall market appears to have shrugged off the social network’s misfortunes as both the Dow Jones and the Nasdaq have posted modest gains.

Facebook’s latest swoon does, however, appear to be pulling down its ill-starred step-brother, Zynga (s znga). The social game maker has fared even worse than Facebook, falling nearly 15 percent today alone. 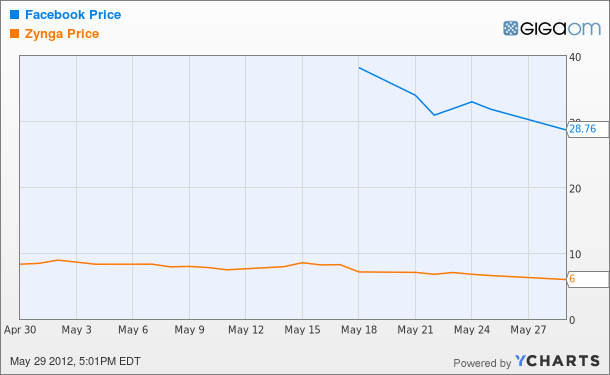 Facebook’s underwhelming performance since going public have set off recriminations and lawsuits between the company’s bankers and investors who accuse Facebook of failing to disclose that its growth prospects were slowing.

Facebook’s flop has set off hand-wringing about the prospect of a new tech bubble or a gloomy market for future IPO’s.

As ReadWriteWeb reports, however, not everyone can come bolting out of the gate. Its three year post-IPO chart, which shows a slumping Apple (s appl) and a soaring Yahoo, underscores how share price may not be the best metric of determining a company’s long term value.

Facebook closed down nearly 10 percent at $28.84 while the overall market finished up around one percent.