Venture capitalists are paid to predict which technologies will be the game-changers and to invest in those to help them succeed. About 10% of their investments, historically, would hit it big, but that rate of success is rapidly declining and many think the model is broken. However, VCs do get to spend a lot of time thinking about the future of technology and sometimes they get it right. 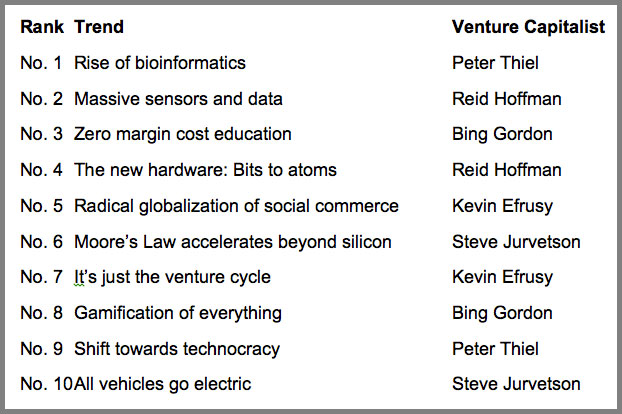 This table shows the top 10 trends ranked by voters at the event and on Twitter as the most important alongside the VC that made the prediction. Here are my observations on the list. You’ll notice that cloud computing doesn’t feature anywhere on here and that’s because it’s no longer a futuristic trend; it’s the computing paradigm we are currently living in. Take any of these trends and it’s likely the cloud will power the computing resources behind it. To mention cloud computing as a differentiating factor in what you are building today is like saying you’ve built the fastest boat to sail around the world and, oh by the way, you’ll be using the ocean to get there. Of course you will; there’s no other way to do it.

I was surprised the panel didn’t mention cyber security, as I think the rise of social bots and cyber terrorism are only going to increase over the next few years and will suck up technology funding, by necessity not desire. But again, maybe that’s a given? Perhaps it’s part of Peter Thiel’s prediction that we are headed toward a technocracy in which we are forced to do more with less. He said that with U.S. government deficits at around 10% of GDP, government subsidies for technology research would dry up and be replaced by private sector technology services. We can already see this with the space program, which has become too expensive for NASA. In it’s place there are privately funded programs emerging like SpaceX. I could easily see the government not keeping up with cyber security funding and industry stepping in with innovative new services as a replacement.

I’m in full agreement with the trend around the explosion of big data from sensors in everything (phones, tablets, clothes, cars, houses, household goods, stores, traffic signs, you name it, the list is endless). And the panel raised a couple of important points that might mean this trend won’t be as disruptive as we expect. Kevin Efrusy said that hundreds of companies approach his firm and say they have so much data; there must be something useful there. But he thinks not. “It’s not that you can’t find the signal, there just ain’t one. Most data is garbage,” he said. And Bing Gordon noted that the world’s smartest algorithmic engineers are “stuck” working on ad networks today instead of working in medicine, or other fields that might  benefit society. Both these points support our research, which says that it’s not about how much data you have, or how efficiently and cheaply you can store it, but what insights you can glean from it to improve your business or advance society. That’s what will make this big data trend real and significant, or just a passing fad.

My favorite trend on the list is No. 3, zero margin cost education and we’re starting to see this happening as traditional schools like Harvard and Stanford offer online course to thousands of students a year. There’s also Khan Academy and many other services like it that sidestep the monopolistic, unionized, broken school system that the western world is currently stuck in.

My least favorite trend on the list is the gamification of everything idea. I go to the movies, listen to music, read books and have dinner with friends not because some game is going to reward me points if I do so. I think there’s something deeper that human begins strive for in communicating with others, and it doesn’t come from a compulsive game built into everything. I hope I’m right.

Last of all, the craziest trends on the list were: Moore’s Law accelerates beyond silicon and all vehicles go electric.  Remember, these are supposed to be predictions for the next five years. I’m rooting for both of these, but I’d say it’s more like 10 years for technologies like carbon nanotubes to come to market in viable products that could replace the transistor. If this prediction is true, it will catch a lot of people by surprise and we not thinking big enough about technological progress. And lastly, everyone driving electric cars would be awesome, but as Peter Thiel noted, what is the incentive for us to make the switch? Gas is $10 a gallon in the UK and the Brits are not driving electric cars. They are also way more politically active around global warming and environmental issues. So I think this trend is more like 20 years away. All in all, these trends were interesting to hear about, but the timeframe in which they might be realized was way too soon for most of them.