A key objective of online social media marketing is to reach influential consumers and get them to pass the word. But marketers and advertisers have to find those influencers first. Do consumer technology influencers gather on Facebook? Are the fashionistas all on Pinterest?

Marketers and online publishers can better understand and reach consumer influencers in various product categories with analysis derived from our Q1 survey of 1,165 U.S. online adults. We asked consumers whether their friends seek their opinion on consumer electronics, movies and TV shows, and style, and whether they are the source for recommendations on financial matters. A relatively small number of people (20 to 25 percent of the U.S. online adult population, or 30 to 40 million people) carry much weight with their friends in any category, and they tend to be semi-specialists. (I have found in previous market research that teen influencers are a little different: Cool kids have clout across multiple categories.) 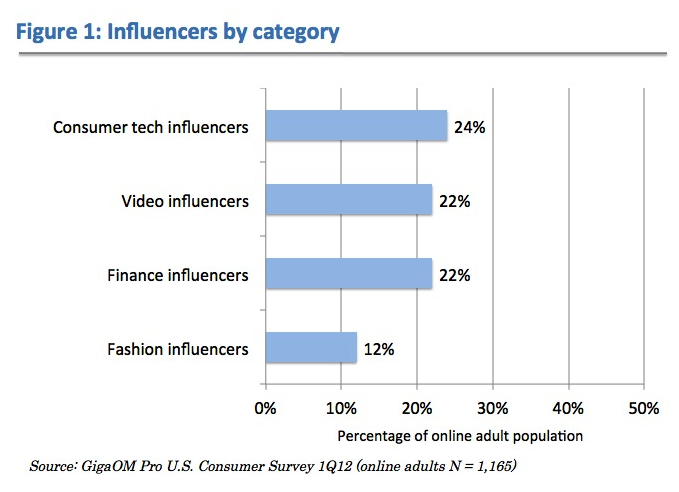 Consumer electronics and technology influencers, the biggest category, shows the highest overlap. Over half of consumer tech influencers also influence friends in all of the other categories, even fashion. Don’t stereotype fashion influencers as female; 46 percent are male (60 percent of tech influencers are male). Clever marketers should combine themes in ad campaigns or offers. Entertainment combined with a mobile phone or PC is obvious, but what about fashion or finance? 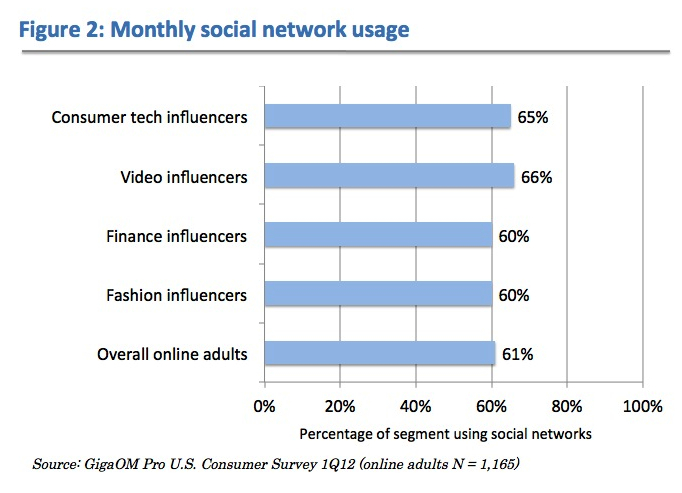 So which social networks do influencers use? The same ones as everyone else. Ninety-four percent of regular social market users use Facebook, according to our survey. That figure only varies by a few percentage points for each category of influencers. Since Facebook has by far the most users of any social network, marketers will find lots of influencers there. 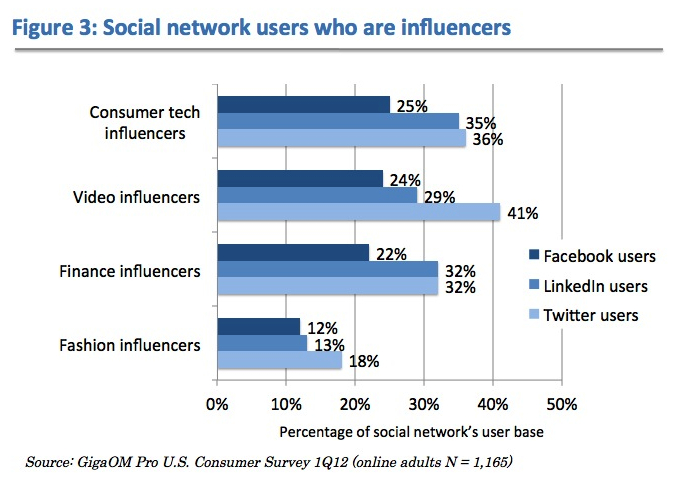 But at the same time, over half of the influencers that use social networks use more than one, and over 20 percent of each category use three or more. Our survey shows Facebook doesn’t always deliver the highest concentration of influencers. Marketers may be able to get a better bang for their advertising buck with campaigns or programs that use Twitter, as shown in Figure 3. Across the board, more Twitter users are influencers compared to other social networks. LinkedIn has a similar concentration of finance influencers among its membership.

What about the newest hot brand in social media, the social scrapbook Pinterest? Well, Pinterest still has a relatively small membership base of 10 to 15 million users, though those users spend time there like on no other network than Facebook. Our survey got a statistically insignificant number of respondents who use Pinterest. Examining the survey results for directional indicators, you will find that Pinterest appears to attract more than its share of early adopters and people who want to be in the know about new products. But while Pinterest attracts an above-average concentration of video influencers, it actually looks below average for fashion.

Marketers must probe deeper than what might be conventional wisdom. We encourage GigaOM Pro clients to ask us to dig into our consumer survey results. Meanwhile, keep an eye out for our coming survey-based analysis on social TV, e-books, social commerce, cord cutting and other topics.

What else would you like to know about consumer influencers?