There’s no escaping the hype around big data, at least on the vendor side. The flood of venture funding flowing into big data startups is ongoing, with some firms like Accel Partners creating new funds specifically targeting big data companies. But do enterprises care yet? (And by “enterprise” we mean mainstream IT shops that are typically much slower and more conservative when it comes to shiny, new technologies.)

We decided to find out via a survey that we fielded in February to just over 300 medium to large-sized enterprises across North America. The results were interesting. Eighty-five percent of respondents viewed their data as a strategic asset to their business, and 77 percent said they had budgets allocated for big data projects in 2012. A third of respondents had put aside 20–30 percent of their budget for big data, and 57 percent said this was a bigger percentage of their budget than a year ago. 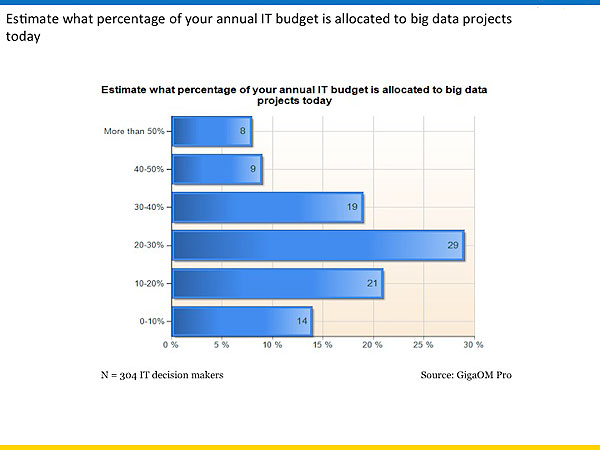 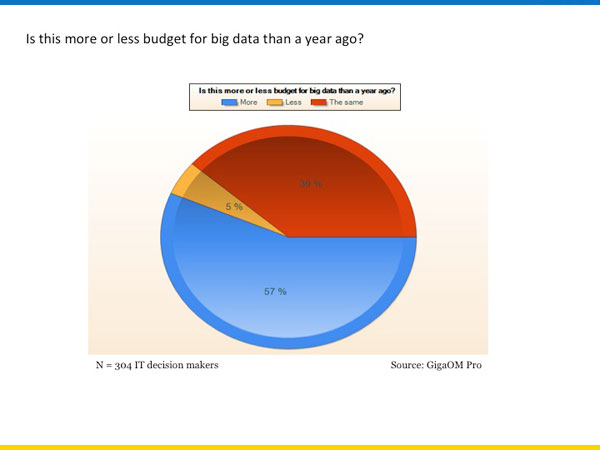 I remember fielding enterprise surveys two years ago, when cloud computing was the hottest trend in IT and finding way less enthusiasm from IT decision makers. The difference is the pain associated with the problem. Cloud Infrastructure-as-a-Service, for example, doesn’t solve an immediate problem or answer a business question. It can reduce IT costs — in some cases but not all — and it can help users launch new things faster. Big data software, meanwhile (and I’m really referring to Hadoop), can help users draw insights from the enormous mountains of data they are collecting and find patterns in it that illuminate business opportunities. For example, a giant retail store could pull together weather data, public holidays and coupon shopper data to decide what to discount in the store and when, to drive more sales. And they do. 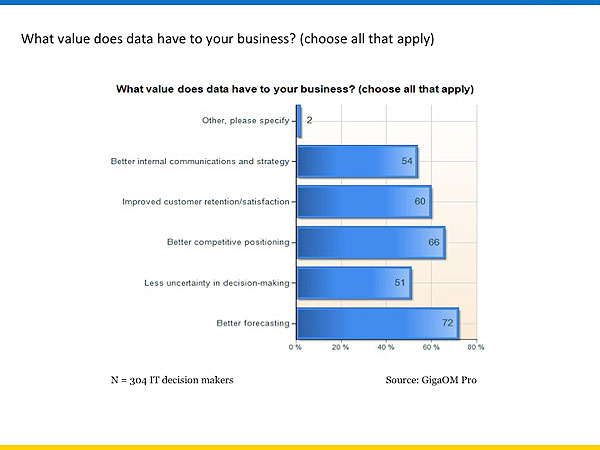 I remember a similar sentiment when CRM software first hit the shelves. Companies went crazy for it, believing it would increase sales, and then they were disappointed when they weren’t able to measure the success and began to doubt the investment altogether. Deploying big data software is no different. You will still need metrics by which to measure whether the project is a success and all the usual business plans in place before the project begins — one that quantifies the expected costs, tangible financial benefits and intangible strategic benefits, as well as the risks. Not to put a damper on it, but big data projects are just like any other IT project. It’s the business results that count, not the technology that will be long forgotten as the next shiny, new software program hits the store.