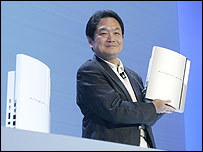 In an announcement that shouldn’t surprise regular GigaOM readers in the slightest (warning signs emerged as far back as last February, and reached crescendo pitch in November and December), Sony Computer Entertainment Inc. just announced that CEO Ken Kutaragi, the “father of the Playstation”, will leave his post in June and become an “honorary chairman of SCEI”.

By most appearances, his new title will be an “emeritus” position in the sense attributed to Rupert Murdoch, when he showed a Newscorp exec the door: “The ‘e’ means you’ve been given the elbow and the ‘meritus’ means that you bloody deserve it!” Unsurprisingly, most analysts attribute the departure to the Playstation 3’s poor performance against the Wii, and worst blow of all, as compared to the Xbox 360.

Not entirely deserved, however, for despite the numerous missteps in its development, pricing, and marketing, the PS3 ultimately failed because Kutaragi succeeded with the PS2 so well. Though seven years old now, the Playstation 2 is still selling better than the Playstation 3; with a 116 million+ installed base, a massive library, and a list price under $100, there’s little incentive for Playstation fans to spend $600 upgrading. (Especially when quality backward compatibility was in doubt.)

So there’s tragic irony in Kutaragi’s departure. Having transformed videogaming into a truly massive entertainment medium, he seems to have assumed that the market he did so much to create would follow him to the next level.

As IDC analyst Billy Pidgeon put it to the AP, “Sony didn’t notice that their audience was dwindling and didn’t increase the base by playing to a wider demographic, and instead it played the old-school game of playing to the 18- to 32-year-old male early adopter.” But in those seven years, the young men who had eagerly snatched up the PS2 were now having kids of their own, making them ripe targets for a console that could appeal to their whole family. So rises the Wii– and so goes Kutaragi-san.