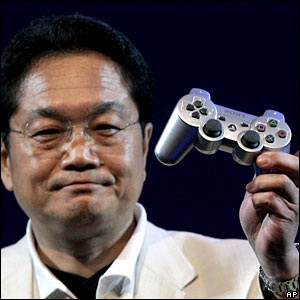 There’s got to be a great story behind the rise and precipitous fall of the Sony Playstation, once the industry’s dominant console, but now in its latest incarnation, the PS3, an overpriced also-ran struggling to keep up with the Nintendo Wii and trailing far behind the Microsoft Xbox 360.

From all signs, it’ll be a tale of corporate hubris worthy of Greek tragedy, performed in kabuki masks. And fortunately for us, there’ll be more than a few talented journalists from big publications who will write that tale.

In last cycle of consoles, when you wanted to follow the latest news, you had little option but to read gamer sites and magazines, and try to cull bits of legitimate info from acres of PR hype. (You did somewhat better by visiting non-commercial gamer sites or insider-heavy online forums.)

But that was four-six years ago, and since then, the mainstream media has invested far more resources to covering the game industry, with a lot more prominence and seriousness. Which is a great thing for the business and for consumers– but not so good for flailing game companies that seem hellbent on disaster.

Take two stories in recent days; last cycle, they were the kind of thing that you’d have to find on a industry gossip site or fan board– but now, they’re showing up in Newsweek, or on the front page of the New York Times website.

Which is where I discovered Seth Schiesel’s devastating review of the Playstation 3, merciless in its specificity of the system’s many failings, from its difficulty of setup to its inability to multi-task (you can’t download files or play music while gaming), to its cumbersome online services, and more. By all appearances, Schiesel isn’t a befuddled journalist writing about the Playstation merely because his editor assigned him the task, but a passionate, knowledgeable gamer who knows first-hand how poorly the PS3 performs, especially compared to Xbox 360.

Then there’s the jaw-dropping report from the Newsweek blog of N’Gai Croal, which answers the burning question, “Why is the Playstation 3 debuting with so few exclusive titles?”

As it turns out, it’s because PlayStation chief Ken Kutaragi never got around to asking for them. Top publishers Ubisoft, Take-Two, and its studio Rockstar Games (whose Grand Theft Auto III effectively became PlayStation 2’s killer app) were interested in creating exclusive titles for the PS3, reports Croal. But Kutaragi just wouldn’t pick up the phone in time.

“PlayStation’s Japanese headquarters was effectively radio silent,” Croal writes, “and without Kutaragi’s signoff, the normally independent American and European branches had no authority to reach agreements on the exclusives they believed could be valuable to the PS3 cause.” Meanwhile, with Microsoft executives constantly pleading at their door, all three developers made exclusive deals with the 360.

It’s an astounding behind-the-scenes story, especially coming from a reporter as well-regarded as Croal. Who knows what is to follow, but the story so far has been worthy of television series.